On May 20 the D.C. Bar celebrated the graduation of 24 attorneys from its John Payton Leadership Academy, an intensive training program focused on developing and refining the skills necessary for Bar members to become effective leaders.

Established in 2013 and subsequently named in honor of the late civil rights attorney and former D.C. Bar president John Payton, the academy is designed for both new and veteran attorneys to develop pathways to professional leadership. This year’s training included sessions on leading in times of crisis, accomplishing goals while working remotely, and developing resilience.

Course instructors Laurie Lyte and David Maas said that the class of 2022 stood out as a group that was both eager and capable. “It was a fabulous class [with] great depth of thought and a willingness to put themselves out there, and it was really [wonderful] to work with them,” Lyte said. Maas shared Lyte’s assessment: “I think they will be a great group going forward in terms of leadership for the Bar.” 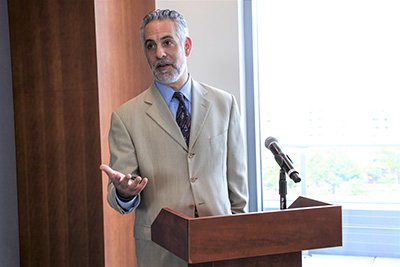 D.C. Bar President Chad Sarchio was joined by several Bar leaders, including immediate past president Geoffrey Klineberg and incoming president Ellen Jakovic, in congratulating the group. “I think that the Bar has a lot going for it. Frankly, what I think it has going for it most is all of you — its future and the potential that it has within its ranks moving forward to take the profession, the Bar itself, and our community forward in such a positive way,” Sarchio said in his speech addressing the graduates.

Among the graduates was Ashley Cooks, director of the D.C. Office of Government Ethics, who said that the course helped her develop and strengthen skills that she already calls upon in her current leadership role. “I thought that taking the course would help me to supervise my staff, to manage the agency, and it has. It has been a wonderful experience,” she said. “I would recommend the course to any and everyone.”

Christian Nestor is just starting out as an attorney but gained leadership experience as a captain in the Army Reserve. Although military service has taught him important lessons about leadership, he said the course helped him develop alternative approaches that he intends to incorporate in the development of his legal practice. “It’s not like the Army,” he said. “You can’t just tell a lawyer to go and do … you have to use a little more finesse and soft leadership skills.”

Nestor said that the opportunity to meet with similarly motivated peers was an important secondary benefit of the course. “I’m just starting out in my career. There are so many avenues that I could go into. Being able to get that perspective from different lawyers, I feel blessed,” he said.

Shanellah Verna Harris of Morris, Manning & Martin, LLP said that the course provided a welcome opportunity to step back from the intense moment-to-moment considerations of a mid-level associate and consider her personal development and career track. The course’s self-assessments gave her the opportunity to seriously consider her strengths and determine where improvements could be made, she said.

Harris also hoped to expand her contacts within the legal community, and she found inspiration in the diversity of practice areas that her peers represented. “Whatever you want to do, you can do it,” she said. “You just need to find how it works for you, and I think that’s pretty important.”

Bardia Bastin, who works in the nonprofit sector representing veterans, said that the course helped him reimagine the role that he could play in the legal field. He was admitted to an MBA program that begins in the fall. “I’m hoping to do something more,” Bastin said. “Using the skills from here [to] help you lead and get people to follow you is going to be instrumental, I think, in starting something of my own. I think this is the first step in a journey, but hopefully, I’ll get there.”

The class of 2022 did address one common disappointment — the fact that the day’s coursework and graduation ceremony was their first opportunity to meet in person. Bastin, speaking to fellow graduates gathered on the Bar’s rooftop lounge, hastily arranged an informal gathering to take place after the event, saying that the course may have reached its conclusion, but the relationships formed there had only just begun.

The D.C. Commission on Judicial Disabilities and Tenure is inviting comments on the qualifications and fitness of Judge Anthony C. Epstein and Judge Heidi M. Pasichow, who are each seeking reappointment to a 15-year term as associate judge on the D.C. Superior Court. Their current terms expire on August 24, 2023.