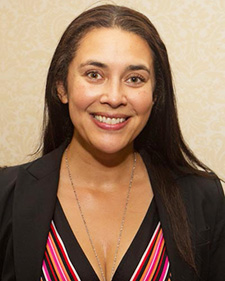 Since Tristia Bauman was 12 years old, she was told she would make a great lawyer. She loved debating ideas and helping the underdogs in life. “I’m sensitive to equality and fairness,” says Bauman. “I’m the type of person who spoke up for the bullied kids in school.”

As a senior attorney at the National Law Center on Homelessness and Poverty, Bauman battles for the underdogs every day while working to shape public policy to preserve and protect the rights of the homeless.

For more than a decade, Bauman has worked as a public interest attorney, starting out as an attorney at the Legal Services of Greater Miami, Inc. and, later, as an assistant public defender in Miami-Dade County.

Bauman’s passion for combatting poverty and homelessness is personal. As a young child, her father fell while lifting a picnic table during a camping trip and slipped a disc. The medical procedure used to treat the disc caused severe damage to her father’s spinal cord, leaving him disabled and in chronic pain. He had to leave his job as an executive director of a nonprofit health clinic in King County, Washington, and could no longer work.

“That showed me that you can do everything right and still end up precariously housed and in a situation where you are very poor,” says Bauman. “It showed [me] how easily you can end up on the verge of having your life destabilized without having made a single wrong choice.”

As a student at the University of Washington School of Law, Bauman knew she wanted to work as a public interest lawyer with a focus on housing issues. She took every course she could that involved civil rights, human rights, and poverty-related issues. Instead of following her classmates onto moot court teams or to summer associateships at big law firms, she sought internships with nonprofit legal organizations.

“I wouldn’t necessarily recommend my path to others as the path, but I felt confident that it was right for me,” says Bauman.

Following her first year of law school, Bauman traveled to Anchorage, Alaska, for an internship with Covenant House, a legal service provider for homeless youth. That experience solidified her interest in working on housing issues and homelessness.

During her third year of law school, she interned with the Public Defender Association in Seattle, where she witnessed the populations she sought to advocate for get caught up in a system that was inherently unfair. The experience ultimately inspired her to find a job as a public defender after she finished her degree.

Throughout her career, Bauman says she experiences a pull between a desire to work on housing issues and homelessness on a larger scale — like advocating for more effective, compassionate housing policies at the local and national level — and a desire to help clients on an individual basis.

After extensive experience as a public defender and as a public interest lawyer working on public policy advocacy, Bauman concedes that there is no one type of career that she can confidently say makes the greatest impact. “A career spent advancing impactful policies is not more valuable than a career full of helping people to regain their freedom or get housing. There is a role for all of us to play,” she says.

However, Bauman says, the pace of change can be frustrating when advocating for new policy related to poverty and homelessness.

“When you’re trying to get people to think about homelessness in a constructive way, and they’re still stuck on the idea that all homeless people choose to live outside because they’re drug addicts, it’s frustrating,” says Bauman. “You realize we’re not even at square one in discussing solutions. We’re still dispelling myths."

While working to change public opinion and shift public policy on housing issues and homelessness can be frustrating, Bauman finds her work incredibly rewarding.

“Seeing the lightbulb go off on in the mind of a lawmaker when you convince them about how and why using police responses to unsheltered homelessness will never work and will always be a waste of taxpayer dollars feels great. But, more than anything, it feels good to see people who are too often powerless stand up for their rights, for their dignity, and for justice. It is amazing to spend each day being part of that,” Bauman says.