Marnie Hammel Runs Her Business With a Purpose 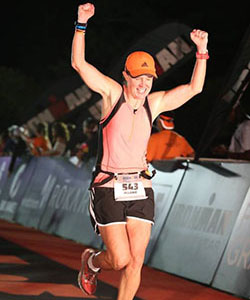 When Marnie Hammel talks about how much she gets done in a typical day, you might think she’s made a mathematical error. Hammel and her wife co-own two D.C.-area offices of the home cleaning franchise Two Maids & A Mop, which keeps her busy at the office or on the computer from 7 a.m. to 11 p.m. But she also takes her twin six-year-olds to and from school, finds time to play with them, and volunteers at their school. And she starts or ends most days with training for an Ironman, her second, squeezing a 40-mile bike ride or an 18-mile run into what already seems like an impossibly full day. (For the record, she claims to sleep six to seven hours a night.)

Call Hammel’s attention to her productivity, and she’ll shrug it off as normal lawyer behavior. “In private practice, you return every call the day you get it,” says Hammel, who worked in insurance law for 16 years before starting her own business. “That was something I was big on and I try to do that now, too.” She answers every email every day; her response rate on the business’s Yelp page is an eye-widening 96 percent. Her secret? “If I say I’m going to do something, I just do it,” she says, with the simplicity of a Zen master.

Being this productive obviously requires inordinate amounts of decisiveness and commitment. You might think it would make a person rigid. But Hammel is far from that. In fact, she says that she never imagined herself running her own business; since the age of five, her dream was to become a lawyer. As you might imagine, having made the decision, Hammel didn’t waste any time. After graduating from the University of Pittsburgh in 1996, Hammel worked first as a litigator at a private firm, and then for an insurance company and a broker. In 2011 she had twins, a boy and a girl, and she stayed home to care for them. In 2016 Hammel was preparing to go back to work when her wife, an entrepreneur who had helped launch several successful startups, said she wanted to buy a local franchise of Two Maids & A Mop.

At first Hammel was adamant that she wanted to keep practicing law. But she also wanted to support her wife’s decision and make sure the business was a success. On top of that, she liked the company’s unusual payment model, which rewards cleaners for better work. So, in 2016 the couple took the leap and bought an office in Rockville, Maryland. Now Hammel handles clients and manages employees, while her wife takes care of accounting, payroll, and other aspects of the business.

What keeps Hammel interested, despite the fact that she didn’t train for this work, is a strong sense of purpose. She wanted to be a lawyer in the first place because “you can effectuate change and make a difference,” she says. “Now I’m just doing it in a different way.” She finds fulfillment in knowing she’s building a future for her children, helping families — many of them headed by professional women — have clean homes, and providing better working conditions for cleaners, who often are extremely underpaid.
In 2017 the office began donating to Cleaning for a Reason, a nonprofit in the United States and Canada that matches women undergoing treatment for cancer with free house cleanings. They’ve donated more than 100 hours so far.

After working with Cleaning for a Reason for six months, this sense of purpose motivated Hammel, already an avid triathlete, to make another courageous leap. Hammel had been wanting to run an Ironman for years, but the triathlon — a 2.4-mile swim, 112-mile bike ride, and 26.2-mile run — gave her pause. She had never done those distances all together. While one might think that starting her own business makes her a risk-taker, Hammel reveals, “I’m the kind of person who doesn’t like to fail, so I’m not really good at trying things unless I know I can do it.”

But then she had the idea of using the event to raise money for Cleaning for a Reason, and that gave her just the push she needed. In October of 2017, having raised $2,000, she found herself crossing the finish line and hearing the words she’d dreamed of for a long time: “Marnie Hammel, you are an Ironman.”

But the race was not without its tough moments. And neither is her busy life running a small business. But when Hammel begins to doubt herself, she remembers another important purpose — inspiring others. While considering whether to buy the Two Maids & A Mop franchise, Hammel heard a few years ago at a conference that fewer than 3 percent of women-owned businesses earn $1 million in revenue. (While sources differ, one recent study puts that figure at 4.2 percent.) “That shocked me,” she says. “Then, of course, my goal became, we’re going to be over a million dollars.” But this was not so much to prove something to herself, but to inspire others. “I’m trying to teach all the women I come across, ‘you can do whatever you want,’” Hammel says.

But to reach those goals, it all comes down to making that deceptively simple decision in the moment to run the next mile or answer the next email, no matter what. Hammel also says that, when anxiety enters, it’s better to focus on the part you’re on rather than the whole journey ahead. “If you’re on mile 60 of the bike, and you have to do another 52 miles, plus you have to do an entire marathon, you’ll just overwhelm yourself,” she says. “That’s the same with this job.”

Hammel and her wife have since opened another office in Alexandria, Virginia, and in 2018 they won the Fastest Growing Office Award at the Two Maids National Conference. Her wife wants to open four more offices someday. But “if I think about that I’ll be under water,” Hammel says. “I have to take it just one step at a time.” What she doesn’t lose sight of is the purpose of it all. During boring moments in her training, she motivated herself with the mantra, “I’m becoming an Ironman. I’m becoming an Ironman.”

Despite her initial reservations, Hammel enjoyed her Ironman experience so much that she’s training for another in October 2018. Once again, she’s doing it as a fundraiser for Cleaning for a Reason. With a spark of mischief in her voice, she says, “I feel like you can’t be a real Ironman unless you do more than one.”