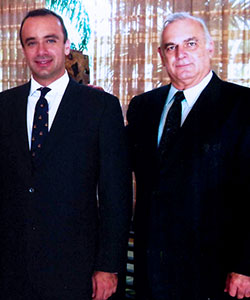 Immigrants—documented and undocumented—often have a hard time in court. English is often not their first language, misunderstandings are rife, and sometimes what appears to be a small mistake can lead to deportation.

Father and-son attorneys Claudio Gnocchi and Paolo Gnocchi have seen all this in their criminal defense and immigration practice. The Gnocchis, of Italian heritage who hail from Puerto Rico and speak English, Spanish, and Italian, work in tandem at the Law Office of Paolo Gnocchi, LLC, in Silver Spring, Maryland.

Paolo handles criminal proceedings. Then, frequently, he passes some of his clients on to father Claudio, a retired Army judge advocate general who specializes in immigration matters. Sometimes the reverse happens—a client with an immigration matter may need his or her criminal case resolved first.

The two men have found that their specialized niche is unlike that of most other law practices, both because immigration issues in the Washington, D.C., area are different than in, say, California, and few understand how a misstep in criminal court can have larger consequences for non-citizens.

“Someone who is used to representing U.S. citizens might think that pleading guilty to a DUI is no big deal,” Paolo Gnocchi says. “But for people who have a different immigration status,” there are larger ramifications.

During his administration, President Obama started increasing immigration enforcement. “People who had traditionally been left alone suddenly became deportation priorities” if they were charged with a misdemeanor, Paolo says.

Many immigrants in this area, Paolo says, have Temporary Protected Status, granted to eligible nationals of certain designated countries that allows them to work but provides no path for obtaining permanent residency or a green card. In other words, while they have a temporary right to be in the U.S., even a small misdemeanor, such as driving without a drivers’ license, could result in deportation. The irony, says Paolo, is that until very recently D.C. and Maryland did not allow non-citizens to get driver’s licenses.

“We realized there was a need for a competent defense counsel who spoke Spanish,” Paolo says.

That’s where dad Claudio, 68, comes in. After a long career as an Army lawyer and as a civilian attorney-advisor for the U.S. Department of Defense, Claudio retired, but he soon found out he wasn’t quite done yet. “After six months, I was crawling the walls,” he says.

Paolo stepped in, telling his dad that many of his clients in criminal court had immigration issues. “He said to me, ‘Why don’t you come down here and see how it works and see how it goes?’” Claudio says.

He found it fascinating. He signed up for D.C. Bar classes in immigration law, something he now says he wishes he had started earlier. In a short time, he had about 200 clients. “This is what I really like to do,” he says.

Much of Claudio’s work is representing clients before the U.S. Citizenship and Immigration Services’ Arlington asylum office. “A lot of lawyers will say, ‘Good luck with your interview.’ That’s a good recipe to have your client fail,” he says. Instead, he prepares clients about the kinds of questions that might be asked so that their asylum is not denied for “silly reasons.” For instance, Claudio says, a legitimately married couple could get tripped up with a question about what kind of toothbrush the spouse uses.

Occasionally, Paolo will refer to his father cases where he has been able to get a charge reduced, but that still require a good immigration attorney to help the client maneuver possible immigration issues.

Paolo also often finds himself representing clients in some disturbing cases. One of them was the case of Audias Sanchez, who was sentenced to 20 years in prison last year for the 2013 death of a four-year-old child and two family members during an impromptu speeding contest with another driver in Montgomery County, Maryland. Paolo argued that Sanchez, his client, was not racing with the other car.

“I think my client was innocent,” he says. But, more importantly, he says, “I believe in the system. When somebody is accused of a crime, they have the absolute right to defense and the presumption of innocence.”

He puts the same faith in the system in cases where his client was guilty. “If they have broken the rules, the system is also going to work,” he says.

Claudio Gnocchi also had taken on some hard cases in his JAG work. One job, for instance, was to represent Army death row inmates. Claudio did that for four years, while most lawyers are only able to handle it for two, he says. The job involved making oral arguments before a military tribunal, much like the U.S. Supreme Court. Those bi-weekly arguments, he says, “really honed my skills at legal arguments and at writing briefs,” skills he now uses in his immigration work.

Today the Law Office of Paolo Gnocchi is quieter than in years past, in part because many immigrants are hesitant to draw attention to themselves for fear of deportation. Even when they may have worked out a deal—supervised probation, for instance—clients could be entered into a federal database. “The next thing they know, they have an immigration agent waiting for them outside the courthouse,” Paolo says.

“Where people who would have flown under the radar have minor things, they now become fugitives and they are picked up when they cross state lines,” Paolo says. He has had clients tell him that they won’t go to court, no matter their case, so they can avoid deportation, he says.

But plenty of clients love the idea of a father–son team taking up their case. “They call me Paolo’s dad,” says Claudio. “They assume I must have taught Paolo all he knows. So I use his fame and his good will for my clients, and it’s worked out really well.”