In Duly Noted the D.C. Bar continues its author Q&A series featuring members who have published works in a variety of genres.

Dyk’s memoir, published earlier this year and recently released in paperback, puts him in the company of appellate legends such as Learned Hand, Henry Friendly, and Richard Posner, though as Dyk notes in his introduction, none of the biographies of these esteemed jurists was self-authored.

Timothy B. Dyk: The Education of a Federal Judge traces Dyk’s generation-spanning legal career and includes reflections on his years clerking in Earl Warren’s Supreme Court, involvement in litigation arising from the Watergate scandal, and appointment to the bench by President Clinton. Along the way, Dyk documents his observations about changes in the legal profession and provides a look at the confirmation process for federal appellate judges.

Here, Dyk talks about his writing process, recalls some of the memorable events in his career, and reflects on how much the legal profession has evolved since he started practicing law in the 1960s.

What motivated you to write a memoir, and how was the writing process?

Originally, I had designed it as a family memoir. I worked with Bill Davies, who is a professor in the political science department at [American University], on the book. He helped with a lot of the research, and he was the one who convinced me that the book might appeal to a [larger] audience, so I credit him with the impetus to write something that had broader appeal.

That decision did change what I wrote about, to a significant extent. Not so much resulting in excising, but in expanding parts of the original draft to cover things like changes in the legal profession, details about what it is like to be a federal judge, and the challenges facing federal judges. Those changes resulted, I think, from the reconception of what the book was going to be.

I find writing challenging, generally. I find writing opinions to be very difficult. I go through many, many drafts of opinions or speeches, and the same thing was true of the book. I can’t count how many drafts I went through, but that’s the way that I write. I try to get a first draft on paper and then I think about it, and think about it some more, and then I add to it, and that’s what I did with the book.

It was, in some ways, an emotional experience — revisiting some of these things that happened in the past, both good and bad.

The book discusses your involvement in a number of historic events. Can you give an example of an interesting experience recounted in the book?

At the beginning of the Watergate case, Alfred Baldwin had been in the Howard Johnson hotel communicating 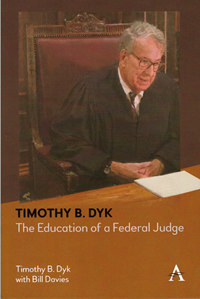 with the Watergate burglars, and the Los Angeles Times did an interview with Baldwin, part of which was published and part of which wasn’t. The outtakes became the basis of a claim of reporter’s privilege, that is, whether the defendants, in this case [G. Gordon] Liddy, could subpoena the unpublished material.

The issue came before Judge [John] Sirica because it was part of the Watergate case, and he ordered the material produced. Despite my pleas that John Lawrence, Washington bureau chief of the Times, should be able to spend Christmas with his children, Sirica ordered him to jail immediately for contempt. We went to the Court of Appeals, which let him out after a few hours. Lawrence spent the time in his jail cell talking baseball with the marshals. Eventually the case settled. Baldwin agreed to release the unpublished material, but it was a significant event in the sense that it communicated to the world what Judge Sirica wanted to communicate to the world: that he was going to be harsh with people who didn’t cooperate with him. This proved to be the case with the original defendants in the case, as well.

In another reporter’s privilege case, I was representing Time magazine, trying to quash a subpoena in the Agnew case for unpublished material. Vice President [Spiro] Agnew had been criminally charged in a federal court in Baltimore, and I was there getting ready to argue to quash the subpoena when in walks Agnew and pleads nolo contendere to the criminal charges … which was a bit of a surprise. It left everybody open-mouthed.

Agnew was about to walk out, and the secret service guys [asked] everybody [to] remain seated while Vice President Agnew exited the courtroom. But when the bailiff said, ‘all rise,’ everybody stood up. To me, that was a triumph of the judiciary.

How has the legal profession changed since you started your career?

There have been both positive and negative changes in the legal profession. One of the positive changes is that women and minorities have a place in the profession, and that was much less true when I was a young lawyer. Not all the problems have been solved, but there has been great progress. Now, more than half of law school graduates are women, and they are becoming partners in firms at a greater rate, and managing a family is something firms are much more accommodating about than they were previously.

On the downside, firms have become enormous, and that has significant consequences for collegiality within firms. People don’t know each other to the same extent that they did when firms [had] 50 or 100 [attorneys], and I think that there’s less loyalty by lawyers to the firms and less loyalty by the firms to the lawyers.

Another thing is that money has become the driver of practice. Everybody loves money, and that hasn’t changed, but I think that … craftsmanship was much more important when I was a young attorney than the money. To me, it seems as though those values have been reversed in recent years. There is too much emphasis on how much people are going to make. I always thought that the quality of the job ought to be preeminent.

Of course, now we have changes that are due to COVID that I think are going to be even more dramatic in the future. People are just not willing to come to work to the same extent. I know that [from] talking to my former law clerks, from what I read in the papers, and from my own son and daughter, who are lawyers. It’s a scary, significant development and an unfortunate one.

It’s not something we’ve encountered so much in the court, now that COVID is less of a concern. Everybody in court is coming to work in person. There’s not a lot of remote work, at least in our court, but I wonder what it’s going to do for lawyers looking for satisfaction in the profession not to have a collegial, in-person relationship with each other, as they used to have.

Was it challenging to write a memoir while continuing to sit on the bench?

It was a bit of a challenge to write while still a sitting judge. One of my colleagues was generous enough to take time to look at it to ensure that I wasn’t doing anything that strayed into impropriety, and I don’t think I did. But as with any book or article that you write when you still hold a job, you are careful about telling some of the stories that you might tell if you were retired. I think the tendency of many judges is to be circumspect even after they leave or take senior status.

I remember Judge [Daniel] Friedman, a wonderful judge who always had very interesting stories about the history of the court and about his own experiences on the court. I asked to sit in on his oral history with the Federal Circuit Historical Society. I thought, this is going to be a gold mine. He’s going to tell all of these stories, and they won’t be lost to posterity. But he wouldn’t tell any of them, and now they’re all gone.

Where can readers find your book?

Timothy B. Dyk: The Education of a Federal Judge is available in hardcover, paperback, and digital editions at Amazon, Barnes & Noble, and other online retailers.