Challenges and Opportunities in Blockchain Technology and NFTs

As the nonfungible tokens (NFTs) market grows astronomically, so do the security concerns and scams surrounding them, as a panel of intellectual property attorneys and cryptocurrency experts pointed out at a recent South Asian Bar Association of Washington, D.C., event.

Blank Rome associate Arun Paradkar opened the discussion by defining blockchain, which houses NFTs as unique cryptographic assets. “A blockchain is a database,” he said. “A typical database is located at one central location — a computer, a server, anything like that — whereas with a blockchain, the database is spread out across many computers, all across the world.” Put another way, blockchain is a public digital ledger to record transactions across many computers. 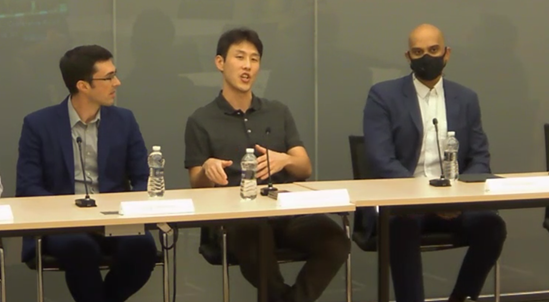 “The key to this is that the computers try to form a consensus as to what is accurately entered into the database,” Paradkar said. He noted that unless someone can fool more than half of the machines on the blockchain, it is difficult to get false data, making it more secure than centrally located data.

Crypto.com Managing Director Kwon Park elaborated on the point, saying that the “consensus mechanisms” employed by different kinds of blockchain-based currency such as bitcoin, Dogecoin, and ether vary, with some requiring a greater or lesser degree of consensus. However, all employ common principles relating to the decentralization of data and the limitations on the ability to create ledger entries.

Blockchains have typically granted authority based on an individual’s “proof of work.” Computers owned by bitcoin miners, for example, race to validate ledgers, employing extensive calculations to trace the transactions, which requires a large amount of computing power. Validators receive a small amount of cryptocurrency in return.

Recently Ethereum introduced a new form of consensus, called “proof of stake,” in response to the issue of energy use by blockchain products, Paradkar said. Bidders can post ether for the opportunity to validate. The more currency posted, the greater the chance of selection.

“This reduces the energy use of the blockchain by about 99 percent; however, the other issue that arises from this kind of proof of work is that there is a single validator,” he said. Paradkar later indicated that the current proof-of-stake system employed by Ethereum also allows users to pool their assets to bid for validation, and that as a result it is currently under investigation by the Securities Exchange Commission for possible violation of securities laws.

DLA Piper associate Greg DeSantis distinguished NFTs from other blockchain products. While various cryptocurrencies have the same fungibility as real-world currencies and can be exchanged for money and products of equivalent value, NFTs are unique, serving as proof of authenticity and ownership of a specific digital asset.

Paradkar also discussed some of the emerging uses of blockchain. “The key to NFTs and a lot of the blockchains that utilize them are smart contracts,” he said. “Smart contracts are an application of blockchain where there’s code running on the blockchain that basically checks for certain conditions, and those conditions are a very simplistic contract between two parties.” Smart contracts allow for the swift validation of simple, standardized agreements with objectively verifiable terms without the need for an intermediary, he added.

Smart contracts are not clearly enforceable in all jurisdictions. Paradkar cited Arizona and Nevada as leaders in the area, having already enacted laws relating to the enforceability of smart contracts. On the federal level, Paradkar expects impacts to arise as states amend their own versions of the E-Sign Act and the Uniform Electronic Transactions Act.

In the context of patents, NFTs have allowed for the trading of intellectual property for cryptocurrency, Paradkar said. IBM, itself a significant holder of patents, has partnered with IPwe to form a patent marketplace for NFTs. “By creating this kind of publicly traded marketplace, we’re going to allow for transparent valuations and transparent ownership of patent rights,” he said.