Erwin Chemerinsky, dean of the University of California Berkeley School of Law, veteran Supreme Court litigator, and one of the country’s foremost authorities on U.S. constitutional law, minces no words in his critique 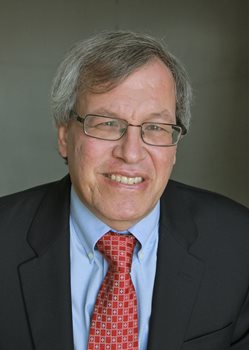 of originalism, calling it an incoherent theory of constitutional interpretation.

“Following the original meaning of the Constitution … requires abandoning originalism as a method of constitutional interpretation. This, in short, is what I call the incoherence problem,” Chemerinsky wrote in The Atlantic in September following the release of his latest book, Worse Than Nothing: The Dangerous Fallacy of Originalism, published by Yale University Press.

A D.C. Bar member since 1979, Chemerinsky has authored 16 books, including a constitutional law textbook, and more than 200 law review articles. In 2017 the National Jurist magazine named him the most influential person in legal education in the United States. Chemerinsky currently serves as president of the Association of American Law Schools.

Here, Chemerinsky talks about the rise of originalism and why he remains hopeful about the future of the Supreme Court.

Ten years ago, would you have expected to write a book on originalism, and what was the impetus for doing so now?

In 1987 Robert Bork was nominated for the U.S. Supreme Court. He was impeccably qualified — a Yale law professor, former solicitor general of the United States, a judge on the D.C. Circuit — and yet the Senate rejected him by the largest margin any nominee has been defeated. It did so because it thought his originalist views were far too dangerous. He did not believe that women were protected from sex discrimination under equal protection. He did not believe there were any privacy rights in the Constitution.

Had Hillary Clinton won the 2016 election and picked three justices, originalism would still be a fringe theory. Clarence Thomas would have been the only originalist justice, and conservative law professors would still have written articles from an originalist perspective. But the 2016 election meant that Donald Trump was able to pick three justices. And the impetus for writing the book was listening to the Amy Coney Barrett confirmation hearings in late 2020, in which she said she is an originalist … in the mode of Justice Scalia. And I recognized that now there are three justices (Thomas, Gorsuch, and Barrett) who are self-avowed originalists and three others (Roberts, Alito, and Kavanaugh) who are very sympathetic to originalism, signing on to originalist decisions and often writing in originalist terms. It was clear that originalism is in ascendancy on the Supreme Court, and that’s why I wrote the book.

In the book you elaborate on Bork’s seminal role in promoting originalism, highlighting the impact of his 1971 Indiana Law Journal article, “Neutral Principles and Some First Amendment Problems.” How do you think Bork seeded originalism in American legal culture?

How would you describe the legal claim of originalism? 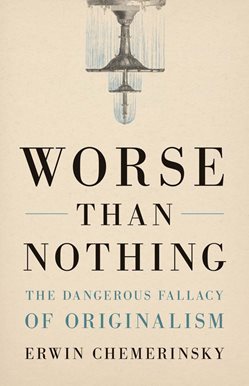 Legal realism early in the 20th century said there is no such thing as a neutral way of interpreting legal texts for coming to conclusions. To put the realist approach in modern language, if you look at the last Supreme Court term, the conservative justices found there is no right to an abortion, there is a right of a football coach to pray at a school activity, the Constitution requires the government in certain circumstances to subsidize religious schools, and there are very broad gun rights. What is going on is the justices are reading their conservative values in the Constitution, and they do it in the guise of originalist language.

No right in the Constitution is absolute; even the most basic rights can be infringed if there is compelling government interest — for some if there is a legitimate interest. But what is compelling or what is important or what is legitimate? There is no neutral way to answer that. It is all about who’s on the Court and what are their values.

Even conservative justices have noted that understandings of some constitutional amendments — for example, the Fourth, Ninth, and Fourteenth — have evolved. Which one would you highlight here?

I think the Ninth Amendment is an explicit textual authorization for non-originalism. It says the enumeration of some rights in the Constitution doesn’t deny or disparage the existence of other rights. I think that is textual authorization for the Court to be able to protect rights even if they are not explicitly enumerated in the text. The Framers were very afraid that if they listed some rights, they would implicitly deny the existence of others. So when they added a Bill of Rights, they wanted that provision to say this is not exhaustive, that there are other rights that can be found for the future.

One of the challenges to originalism that you write about is technological advances that the Framers could not have anticipated. How does this issue apply to the Fourth Amendment’s limitation of search and seizure and issuing of warrants?

Obviously, technology exists today that the Framers in their wildest dreams couldn’t have imagined. Take the important 2018 case of Carpenter v. United States. The issue is that if police want to obtain a large amount of cell location information, which can tell where a person was at any moment in time, is that a search within the meaning of the Fourth Amendment? Carpenter involved a man suspected of robberies, and the police got 127 days of his stored cell location information. The police wanted to show that whenever there was one of these robberies, his cell phone was near there. Was obtaining this a search within the meaning of the Fourth Amendment?

There is no way to look at the original meaning of the Fourth Amendment and answer that question. Justice Thomas’s originalist dissent said the only time there is an invasion of the Fourth Amendment is when there is an infringement of somebody’s property rights. And since there was no trespass in getting Carpenter’s cellular location information, it is not a search. But then by that notion, if the police want to engage in wiretapping, it does not involve a trespass, or if the police want to gather huge amounts of information on any of us, that does not involve a trespass; there is no search and the Fourth Amendment does not apply. There is almost no protection of privacy from modern technology because the Framers could not have anticipated it. I think that shows it just doesn’t make sense to say we are limited to what the Framers could have imagined in 1791.

In your book you mention the 2015 Obergefell v. Hodges case, which overturned state prohibitions on same-sex marriage, and quote Justice Kennedy: “The generations that wrote and ratified the Bill of Rights and the Fourteenth Amendment did not presume to know the extent of freedom in all its dimensions, and so they entrusted to future generations a charter protecting the right of all persons to enjoy liberty as we learn its meaning.” How does that tie in with what you are saying about originalism?

Obergefell v. Hodges was an enormously important decision that said state laws that prohibit same-sex marriage are unconstitutional. Justice Kennedy, in writing for the Court, stressed non-originalism is to be used in interpreting the Constitution; laws prohibiting same-sex marriage existed throughout our history, but that is not dispositive of what should be today. As recently as 1961, all 50 states and D.C. criminally prohibited private, consensual, same-sex activity. But Justice Kennedy says the Constitution’s meaning evolves. What is striking is that there were four justices who dissented. I believe if Obergefell were to be reconsidered today, it would not come out the same way.

You also describe a non-originalist theory in answer to Justice Scalia’s challenge that at least he has a theory. How would you encapsulate your doctrine?

In which current Supreme Court cases will originalism figure strongly?

Justice John Marshall appears a few times in your book. How do you see Justice Marshall bolstering a non-originalist philosophy?

John Marshall said in McCulloch v. Maryland in 1819, “We must never forget it is a constitution we are expounding” and one “intended to endure for ages to come, and, consequently, to be adapted to the various crises of human affairs.” He obviously never heard of originalism, but I think what he is saying is, it has to be a living Constitution.

You ended the book with concerns you have regarding this Supreme Court and the near future. What gives you hope about American constitutionalism?