The D.C. Bar has named David Reiser of Zuckerman Spaeder LLP the recipient of its 2021 William J. Brennan Jr. Award for his decades of service advocating for access to justice for the “poor and powerless.” The award, which honors D.C. Bar members for their excellence, commitment, and dedication in the areas of civil rights, civil liberties, and the public interest, will be presented at the Bar’s annual Celebration of Leadership on June 24. 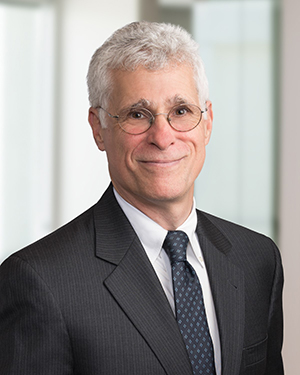 Reiser spent more than a decade at the Public Defender Service for the District of Columbia (PDS) as a staff attorney, supervisor, special counsel, and ultimately general counsel. He served as special assistant to the general counsel of the U.S. Department of Housing and Urban Development during the Clinton administration, working on a wide range of issues, including lead paint remediation, affordable housing preservation, fair housing, and predatory lending.

As counsel at Zuckerman Spaeder, where he has specialized in appellate litigation since 2001, he has committed thousands of hours to pro bono service, including significant contributions to the establishment, development, and expansion of the Legal Aid Society of the District of Columbia’s Barbara McDowell Appellate Advocacy Project. The project not only litigates appeals on behalf of Legal Aid clients, but also files amicus briefs on cases involving matters of importance to people living in poverty.

Reiser views much of his work as an attempt to make the invisible visible. “To me, the real gap in representation is the representation of individual clients in low visibility cases where a lot of real injustice happens . . . not injustice from malice, but injustice from indifference, where the cases just don’t seem important enough and the stakes are small, or at least they seem small to somebody that’s not poor or powerless,” he says. “So, what I’ve really tried to focus on is work that doesn’t appeal to people very much because it seems insignificant except that, by the standards of people who are desperately poor, it’s everything.”

Reiser expressed surprise upon learning he was to receive the award, although it will not be his first. The Legal Aid Society honored him as a Servant of Justice in 2006, and the American Bar Association recognized him with its Pro Bono Publico Award in 2010. “I’m not saying it is completely unfathomable, but the people who have gotten the [Brennan] Award in the past have made really significant contributions to the legal community and the District of Columbia in general, and I’m flattered to be considered in that group,” Reiser said.

His colleagues have noted his modesty despite being an extraordinary legal strategist with limitless energy. His efforts in mentoring and encouraging others to take on pro bono work are also remarkable.

Reiser’s own thoughts on the importance of representing the indigent provide ample explanation for his selection as this year’s Brennan Award winner. “One of the things I think I learned when I was at the Public Defender Service is that you can have great consent decrees and great court remedial orders and not have very meaningful relief for individuals unless there are people fighting in the trenches every day to make sure that the rights that are on paper are actually honored in practice,”  Reiser said.

Established in 1993, the William J. Brennan Jr. Award is presented biennially (alternating with the Thurgood Marshall Award) to a D.C. Bar member who has demonstrated exceptional achievement in the pursuit of equal justice and who has made a significant, positive impact on the quality of administration of justice.