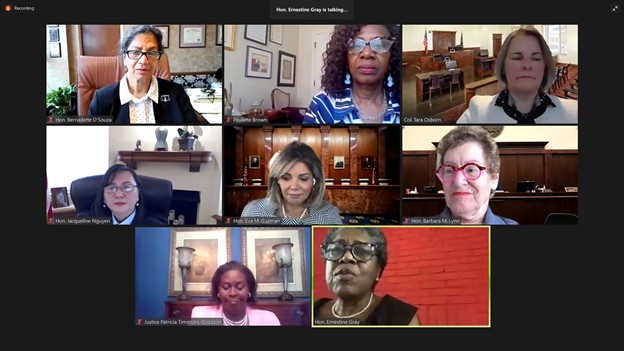 To celebrate Women’s History Month, the American Bar Association (ABA) hosted the program Judicial Milestones in the Quest for Women’s Equality on March 26, featuring women judges from around the country who discussed the obstacles they faced in their career and how they overcame those challenges. The event was moderated by retired Judge Ernestine S. Gray of Louisiana’s Orleans Parish Juvenile Court.

Overcoming Doubts & Discrimination
As an Asian American trial lawyer and then member of the judiciary, Judge Jacqueline Nguyen of the U.S. Court of Appeals for the Ninth Circuit recalled being stereotyped often as “quiet and obliging” or “submissive.” “I grew up receiving racial slurs well into my career,” Nguyen said. “I always faced questions on whether I could be tough enough to fit in the very male-dominated environment.”

Judge Bernadette D’Souza, chief judge of the Orleans Parish Civil District Court, shared a similar experience as an Indian American attending law school. Adding more scrutiny was her status as a mother of three children. “I had some fellow students say to me, ‘Oh you’re on the mommy track.’ You have to be very determined and passionate about your goals in spite all of it,” she said.

Chief District Court Judge Barbara M. Lynn of the Northern District of Texas recalled that in 1973 five of the top 10 students at her law school were women, so female students were feeling optimistic about their career prospects after graduation. That optimism dimmed, however, once they faced gender discrimination. Lynn and four other students at Southern Methodist University Law School formed the Association of Women Law Students and sued several law firms that denied them summer clerkships in favor of male students with inferior grades.

“It wasn’t a great way to endear oneself to the population one was joining, but that was really a change agent,” Lynn said. “We took a lot of the slings during the time we were involved with that litigation. But it really made a difference.”

For Paulette Brown, former municipal court judge in Plainfield, New Jersey, and a past president of the ABA, “there has always been a lower expectation of what it is I’m capable of doing.” Even when she proved herself capable of doing her job, she still had to prove herself all over again. “I call it the PIA Effect — Prove It Again. So, I don’t overcome the obstacles; I manage them. And the way that I manage them is to prove them wrong. Sometimes when they have lower expectations of me, it works to my advantage,” Brown said.

The Way Forward
To help increase diversity and inclusion in the legal profession, Justice Eva Guzman of the Texas Supreme Court cited the power of corporate legal departments to insist on having diverse legal teams and the critical role that law schools play in effecting change. “We need to produce, educate, and train lawyers to make [diversity and inclusion] a priority,” Guzman said.

Nguyen said the legal profession needs to provide better work–life balance for women attorneys who often get penalized when they need to take leave to focus on family matters. In addition to the gender pay gap, Nguyen said women attorneys face a tougher path to partnership at law firms.

Many of the panelists agreed that women in positions of power need to help promote more diversity and inclusion in the legal field. U.S. Army Col. Tara Osborn, former chief trial judge for the U.S. Army, likened the legacy of women empowering other women as a chain. “I am certain that I stood on the shoulders of women who had come before me in what I consider a dual profession,” Osborn said. “I watched these groundbreaking women and saw that they could accomplish [things] and how they could lead. And likewise, I would like to think that the women I had mentored in the judiciary have watched me.”

The panelists also addressed the importance of diversity on the bench to ensure equal justice for all. Brown said the judiciary needs to reflect the demographics of the communities it serves. “In addition, people bring different points of view, depending on what cultures [they] come from,” she added. “If you don’t have a wide array of experiences on the bench, it’s impossible to treat people fairly.”