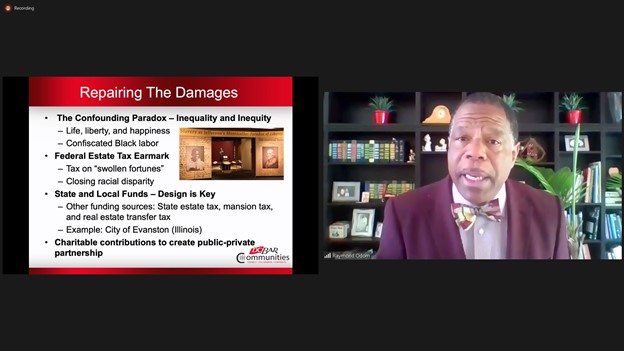 As part of its Diversity, Equity, and Inclusion Summit on June 4, the D.C. Bar presented “The Forgotten 40 Acres,” a breakout session detailing how real property and tax laws contributed to the racial wealth gap in the country. A subsequent program, “Inclusive Business Development,” focused on ways law firms can help close that gap.

Sarah Moore Johnson, an estate planning attorney at Birchstone Moore LLC, traced the history of the U.S. government’s multiple promises to grant 40 acres in reparations to former slaves starting in 1861. She then detailed how the backlash of the Reconstruction Era locked Black Americans into a caste system, which deprived many of them of wealth, and how the government’s denial of property rights impacted them further.

“This recitation of history is important because it shows that there was a clear intent on the part of the federal government to allocate land to former slaves,” Johnson said.

The first U.S. promise to provide land to freed Black people was the Port Royal Experiment in 1861. After the Union captured Port Royal and the surrounding islands off the coast of South Carolina and Georgia, more than 10,000 abandoned slaves were allowed to farm for themselves and paid to grow cotton. The Confiscation Act of 1862 allowed the Treasury Department to seize and sell property belonging to the rebels, and a few Black farmers purchased land. “The Port Royal Experiment was on its way to being a success,” Johnson said.

In September 1863, President Lincoln announced a plan to auction 60,000 acres of South Carolina land — setting aside 16,000 acres for “heads of families of the African race” who could obtain 20-acre lots at $1.25 per acre. But there was controversy over Black people’s preemptive right to the land, and only some Black families avoided being outbid.

General William Sherman’s 1865 Special Field Order No. 15 confiscated 400,000 acres — stretching from Charleston, South Carolina, down the Georgia coast, to St. John’s River in Florida — to be divided into plots no larger than 40 acres for newly freed slaves. However, after Lincoln’s assassination, President Andrew Johnson issued an amnesty proclamation that allowed former Confederates to reclaim their land. Johnson also rejected efforts to bolster the newly created Freedmen’s Bureau, which attempted to settle former slaves, among other initiatives.

“In most cases, the free people were required to purchase their 40 acres of land, albeit at reduced prices. Imagine the wealth that would have been created on the southern coastal lands if Sherman’s order had been allowed to stand today. This area is the vacation homes of the wealthy elite. This lost opportunity to create an inheritance laid the foundation of the racial wealth gap.”

In 1866 the Southern Homestead Act gave freed Black people and Southern loyalists first choice in an auction of the remaining public land. But the act’s short time span — six months — to purchase land and the “Black codes” locking many to labor contracts with former plantation owners prohibited freed Black people from taking advantage of the law.

Raymond Odom, senior vice president at Northern Trust, outlined the resulting wealth gap, pointing out that the median net worth of an average white family in the United States is about $171,000, compared to about $17,000 for Black families. He also said that Black people who obtain higher education don’t necessarily close the gap.

Vanesa Browne, vice president at Bessemer Trust, referenced the groundbreaking 2014 Atlantic article “The Case for Reparations” as a means to bridge the wealth gap. She mentioned how reparations were used in Germany after World War II and in South Africa post-apartheid. In the United States, reparations were made to Native Americans for the unjust seizure of their lands and to Japanese Americans who were interned in World War II camps.

“Each of them really provides us unique elements for consideration of the development of any reparations program,” Browne said. She noted that certain elements stood out for her: travel to local communities to create a space for victims to be heard in a non-adversarial setting, the formation of a diverse coalition to address reparations, direct payments to the injured and their descendants, the funding of educational and community-based programs, and a formal apology from the highest-ranking government leader.

Odom offered several possibilities for reparations, including the introduction of H.R. 40 in Congress earlier this year. People can advocate for estate tax funds to be directed to those at the lower end of the financial chain. He also recommended the creation of new charitable organizations that would allow private citizens to fund reparations.

Another breakout session at the summit covered the ways that businesses can enact change and extend opportunities to all. In “Inclusive Business Development,” Faith Brinkley and LaNitra Webb, two business development managers from Hogan Lovells LLP, explained why diversity and inclusion are important. Webb said that diverse teams outperform homogenous ones and are more innovative because they incorporate wider perspectives. She also mentioned that companies are increasingly expecting their legal providers to reflect the country’s demographic diversity.

In fact, “170 general counsel [and corporate legal officers] penned an open letter to law firms in 2019 that basically said do better on diversity or risk losing their business,” Webb said. “So, we know that law firms often are encouraged to move forward on the D&I front.”

A 2020 National Association for Law Placement report indicated that women and people of color are making incremental progress in representation at the associate and partner level. Webb noted that Washington, D.C.’s legal community is doing a better job than most other places in the United States. “But again, there’s work to be done.”

In terms of influencing work allocation with stakeholders, Brinkley recommended encouraging lead attorneys to broaden their go-to team by interrupting affinity bias and investing in high-performing minority associates and junior lawyers. Brinkley also recommended that firms’ diversity and inclusion efforts be more proactive and holistic rather than simply a client-triggered response.

Pandemic-Era Job Hunt: How New Attorneys Can Ace Their Interviews

Finding a job is still a competitive process, so new attorneys need to focus on the crucial step of acing their job interviews. If you are about to face a first interview or a callback, it is wise to prepare yourself by following these five tips to impress your interviewers and land the job.

On July 23 the D.C. Bar Communities held the first part of its inaugural Legislative Women’s Collective to help bridge the gender gap in politics by empowering women to get involved and run for office.

On July 20 the D.C. Superior Court Board of Judges issued Rule Promulgation Order 21-05 approving amendments to Superior Court Rules of Civil Procedure 10-I and 30.