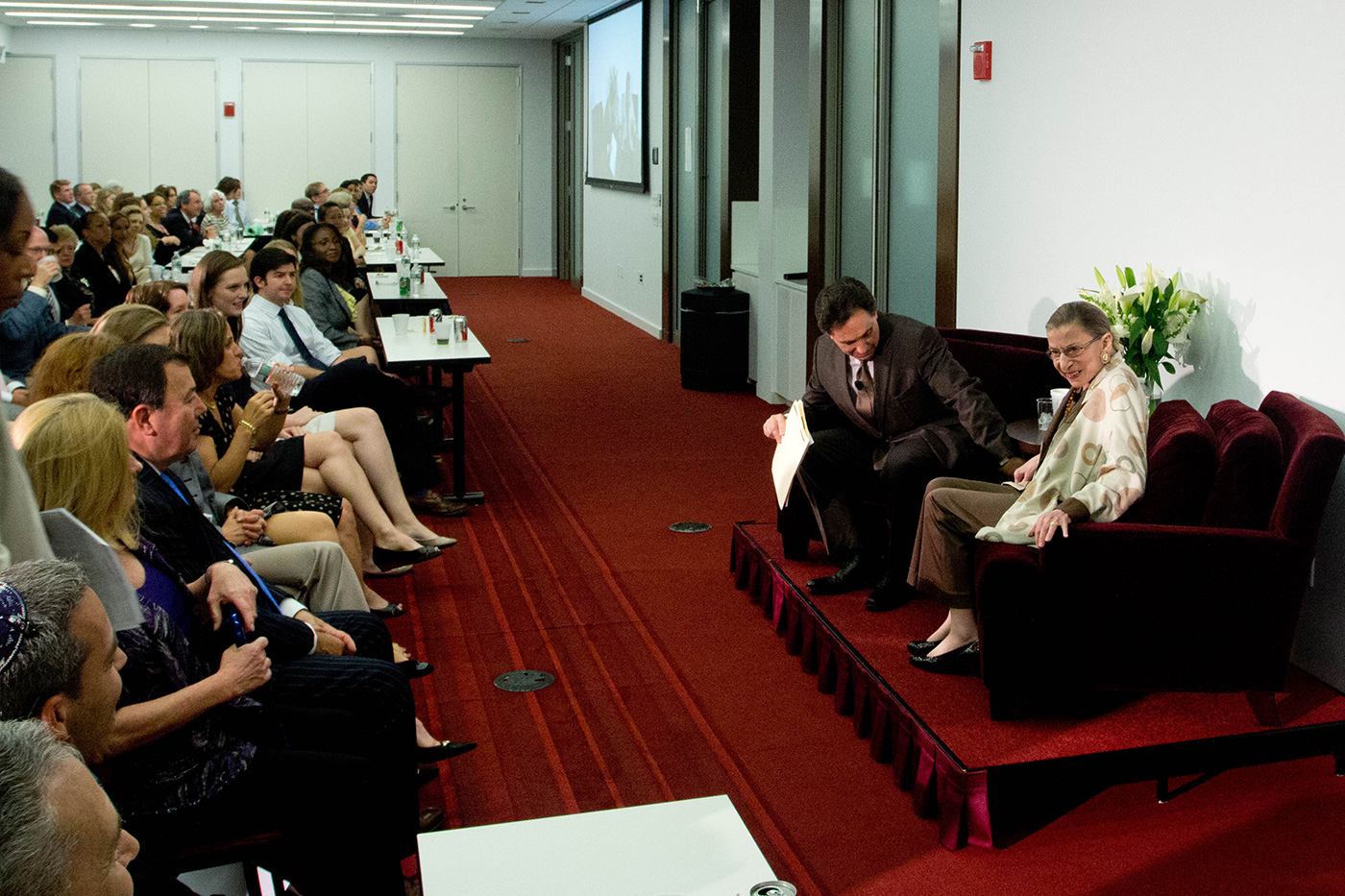 When U.S. Supreme Court Associate Justice Ruth Bader Ginsburg died on September 18, the enormity of the gap she leaves in American jurisprudence quickly became evident as tributes flowed from the D.C. legal community.

“The D.C. Bar joins the rest of the nation in mourning the loss of Associate Justice Ruth Bader Ginsburg,” said D.C. Bar CEO Robert Spagnoletti. “As an attorney, she fought tirelessly to advance the rights of women. As a judge, she worked to uphold and protect the tenets of our legal system for all. She was an American hero who truly elevated the legal profession, and we are a better country due to her contributions. For decades to come, we will benefit from her work as a lawyer and a jurist. We have lost a phenomenal asset.”

D.C. Bar President Geoffrey M. Klineberg wrote, “Justice Ginsburg was a legal giant in the smallest of frames. Perhaps unique in our history, she was a brilliant advocate and judge who had also become a cultural icon, whose fame extended well beyond our profession. We mourn her death, but mostly we celebrate the life and achievements of this brave, fierce, and compassionate defender of our Constitution and the rights it guarantees to us all.”

Attorneys who knew Ginsburg were especially effusive in paying homage. Jamie Gorelick, a partner at WilmerHale and former D.C. Bar president, said that Ginsburg “will be terribly missed both as a jurist and as a friend to many people.” Gorelick remembers Ginsburg swearing her in as deputy U.S. attorney general in 1994. Ginsburg’s face lit up when she greeted Gorelick’s son, who was six at the time. “You don’t often think of someone who is such a towering figure in the law as someone so personable and with so much empathy,” Gorelick said.

Michael Dreeben, a partner at O’Melveny & Myers LLP who has argued more than 100 cases before the Supreme Court as a U.S. deputy solicitor general, recalled Ginsburg as “a pioneering voice for women’s rights and all people’s rights.” Ginsburg “had a unique ability to connect personal narrative to larger constitutional principles and to see and explain how the broader, majestic provisions in the Constitution allow people to live equally as participants in society,” Dreeben said.

“It is clear that she left a huge imprint on gender equality law, both as an advocate and as a judge,” said Gillian Metzger, a professor at Columbia Law School who clerked for the justice.

In the late 1970s, Marna Tucker was serving on the U.S. Judicial Nomination Commission for the District of Columbia when Ginsburg was recruited to come to Washington from New York. Then-president Jimmy Carter was pushing to get more women on the federal bench. “There weren’t many women’s names floating around at the time,” recalled Tucker, a founder at Feldesman Tucker Leifer Fidell LLP and former president of the D.C. Bar. “We were so lucky to get her.”

Ginsburg had co-founded the Women’s Rights Project at the American Civil Liberties Union (ACLU) in 1972 and taken six cases to the Supreme Court, winning five. “The idea that this tiny little sparrow of woman could stand up in front of the entire Supreme Court and get them to go along with her five out of six times — wow, what a legacy,” Tucker said in an interview. 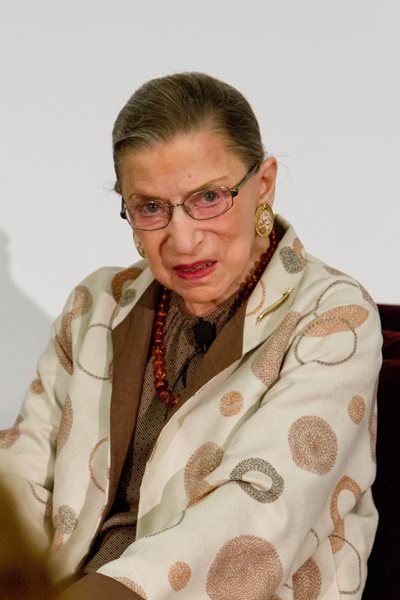 Ginsburg wrote the majority opinion in the 1996 landmark case integrating women into the previously all-male Virginia Military Institute (VMI). She ruled that VMI’s male-only admissions policy was unconstitutional because it failed to show an “exceedingly persuasive justification” for its gender-biased admissions policy.

Gibson, Dunn & Crutcher LLP partner Theodore Olson, who argued the VMI case on the losing side for the state of Virginia, recalled Ginsburg as a “dear friend” for whom he had “unbounded admiration.” “Justice Ginsburg was a warrior for women’s rights, but more than that, for the rights of all persons,” Olson said in an email.

“She was tireless, relentless, a brilliant strategist, and never took her eyes off her ultimate, long-term goals. She held herself and everyone around her to the highest personal and professional standards. She had immense energy, stamina, and determination and a keen, wicked sense of humor,” said Olson.

The VMI ruling stuck down any law that, as Ginsburg wrote, “denies to women, simply because they are women, full citizenship stature — equal opportunity to aspire, achieve, participate in and contribute to society.”

In crafting her opinion, Ginsburg invoked the reasoning of the U.S. Supreme Court in the 1950 case Sweatt vs. Painter, which integrated the law schools in Texas and led to the Court’s decision in Brown v. Board of Education, argued by Thurgood Marshall.

Indeed, Ginsburg and Marshall both understood the importance of speaking out against the norm and how a dissenting view can become law. “Dissents speak to a future age,” Ginsburg said in a 2002 interview with NPR’s Nina Totenberg. “Gradually over time, they become the dominant view.”

While doing research at the Library of Congress on the wives of Supreme Court justices, Ginsburg stumbled on a manuscript written by Malvina Harlan, the wife of former Justice John Marshall Harlan. Ginsburg pushed its publication.

The manuscript told how Harlan’s fiery, lone dissent in Plessy v. Ferguson — the 1896 case that legitimized racial segregation — was written using the same inkwell used by Chief Justice Roger Taney in the infamous 1857 Dred Scott decision. That dissent had been the basis for Marshall’s arguments in Sweatt and Brown.

A Fighter to the End

Ginsburg was an outstanding student. In 1959, she applied for a clerkship with U.S. District Court Judge Edmund Palmieri in New York City. A 1929 graduate of Columbia, Palmieri did not want to hire a woman even though Ginsburg was at the top of her class. Her professor told Palmieri that if he didn’t take Ginsburg, he would no longer send him Columbia students for clerkships. She got the job, and the judge kept her for two years.

“I once had a chance to sit next to her at a Washington lawyers’ dinner. And you could see her determination and focus. She was really a remarkable person,” he said.

Amanda Tyler, a professor at the UC Berkeley School of Law, clerked for Ginsburg in 1999 and remembers her as “a source of comfort and tremendous wisdom in the most trying of times” and “an inspiring role model.”

Ginsburg was first diagnosed with colon cancer in the summer of 1999 and underwent surgery. Everyone in Washington assumed it would prevent her from attending oral arguments when the Court’s term began on October 4, 1999. Tyler “vividly” recalls her surprise when “the justice called chambers from her car that morning. ‘Amanda,’ she told me, ‘call the chief’s chambers and make sure they know I’m coming.’”

The grit Ginsburg displayed showing up to work despite her condition spoke volumes about Ginsburg’s “courage, tenacity, and commitment to her life’s work,” Tyler said in an email. “She was a profoundly dedicated public servant, in no small measure because she appreciated just how important her role was to ensure that our Constitution belongs to everyone.”

D.C. Bar Pro Bono Center Executive Director Rebecca K. Troth also spoke of Ginsburg’s dedication to protecting the rights of all. “A Justice Ginsburg quotation that hits home for me, as someone whose job it is to provide legal help to people unable to afford a lawyer, is her admonition that lawyers have ‘an obligation to provide legal services to those without the wherewithal to pay, to respond to needs outside themselves, to help repair tears in their communities.’ If there were ever a time we needed lawyers to fulfill that obligation, to repair the tears in the community, it is now,” Troth said. “Justice Ginsburg never failed to fulfill this sacred obligation throughout her career as an advocate, a judge, and a justice. There is no better way to honor her legacy than to ensure that justice is not a commodity reserved for the privileged.”