On July 23 the D.C. Bar Communities held the first part of its inaugural Legislative Women’s Collective to help bridge the gender gap in politics by empowering women to get involved and run for office. The central message for attendees was to “go for it,” bringing their life experiences and ways of solving problems in their communities to public office.

Amanda Edwards, who served four years on the Houston City Council starting in 2016, began her opening keynote address by discussing her experiences — from campus activism and work for U.S. Rep. Sheila Jackson Lee to law school and a federal district court clerkship before joining Vinson & Elkins LLP. She credited her community-building efforts after Hurricane Katrina and service on nonprofit boards with helping her win the city council election. Edwards said she did not have prior party involvement that some would consider necessary for running for office. “You don’t have to be asked” to run, she told attendees. 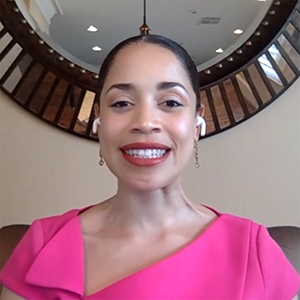 Speaking about her impetus for entering the city council race, Edwards said, “It’s about being in the spaces where you might be most needed.” As a municipal finance lawyer at Bracewell LLP, she saw opportunities to stimulate the economy and wanted to get involved.

It’s important to think critically about the reason you’re running and to “be centered around the people, the public you are aiming to serve,” Edwards said. Then, if you win, be the kind of public servant who will deliver on campaign promises, she added.

Edwards also emphasized the importance of focus, hard work, and resiliency. “Everybody is going to have a setback along the way,” she said, but it’s critical to know how to get back up and maintain that tenacity once you get into office. Though she did not win her 2020 race for the U.S. Senate, Edwards said she plans to reenter public service again.

The JD Advantage
Following the keynote, Mayor Breea Clark of Norman, Oklahoma, led a session on what women lawyers bring to the table and why they should run. Showing statistics on the percentage of women in U.S. Congress (27 percent according to the Pew Institute), state elected positions (28.9 percent), and more, Clark said representation matters not only in inspiring others by example but also because women lead differently and better, pointing to the lower COVID numbers in countries led by women. 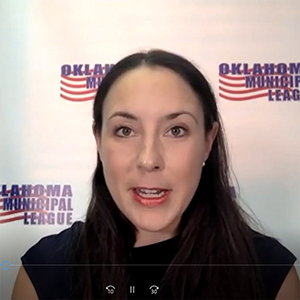 skills, she said. “The JD makes a difference,” added Clark, a graduate of the University of Oklahoma College of Law. Moreover, legal careers are generally more flexible than others, she pointed out. This is important because many elected positions, such as city councilmember and state legislator, are not full-time jobs.

Once they’ve decided to run for office, Clark advised attendees to get background knowledge by watching meetings to learn the issues, meeting their elected officials, and serving on boards and commissions.

During the lunchtime keynote presentation, Priya Royal, co-founder and president of Powerful Progress, moderated a discussion with Pennsylvania House Rep. Joanna McClinton and attorney- consultant Mary Thomas, who talked about their backgrounds and reasons for throwing their hats into the political ring.

While serving as chief counsel to state Sen. Anthony Hardy Williams, McClinton recalled a younger colleague telling her, “If you don’t [run], when will we have a chance?” McClinton said she realized that “[as women] we undersell our value, we undercut our worth.” In turn, Thomas said she felt that her prior experience working in state and federal government would translate best into running for Florida’s second congressional district seat in 2016.

When asked about the greatest challenges they faced, McClinton said it was having people not take her seriously. Just as she had to do as a public defender, McClinton said she jumped through more hoops than a man to get the same respect.

Thomas noted that people in her district, which relies heavily on the logging and timber industries, were hesitant to meet with a woman of color. “It took getting out there and them seeing me in person” to break down that barrier, said Thomas, who also encountered bias with voters wanting to know how she was going to take care of her toddler. “There will always be people who have biases. You move on and persist, knowing that . . . you’re doing it for the right reasons,” Thomas said.

‘Give It Everything You Have’

In the day’s second session, discussion turned to mapping out where to run for office. New Hampshire State Rep. Manny Espitia focused on opportunities at the local level. “These positions have some of the most impactful needs for people,” said Espitia, northern regional director of the political organization Run for Something. At this level, decisions are being made about allocating millions of dollars for projects, plus there are low barriers to entry and running a campaign does not require spending millions of dollars, he added.

“It’s a good place to start building that résumé,” Espitia said. Officeholders handle budgets, work with different agencies, and gain other experience that will help build their reputation, brand, and base.

Krysta Jones of Vote Lead Impact echoed the importance of getting to know your elected officials and being engaged in organizations like the League of Women Voters and the National Women’s Political Caucus to understand what’s going on across the state, not just your community. If you’re considering running for office, volunteer on a campaign, Jones advised attendees. She also recommended that women think of a long-term strategy and what positions are jumping-off points for higher office.

Espitia, Jones, and Waki talked about how to search for positions and the requirements for entering a race. Potential candidates need to know the applicable elections laws and how to get on the ballot — for example, whether you need signatures or a primary win. Get the facts about the costs of running and figure out who you’re going to get early money from, the panelists told attendees.

Even though potential candidates might have the tools they need to launch a campaign, the speakers acknowledged the stress involved in disrupting their current careers. “You have to have a willingness to confront that fear, whatever you’re afraid of in terms of blowing up your life,” said Edwards. “But there will be no perfect time in your life to run.”

“Don’t let the fear of leaving something stop you from running,” said Thomas, who left her job as general counsel at a state agency. “Being completely committed to it . . . that is what is going to get you through.”

“You have to get support,” McClinton offered. “Talk to the folks in your circle who are not connected to your political success or future” and “give it everything you have.”

The second part of the Legislative Women’s Collective will take place on July 30.

Businesses have faced incredible challenges during the COVID-19 pandemic, bringing some to a difficult juncture in which they must seriously consider reorganization or liquidation.

To help attorneys advance their understanding of cryptocurrency and new financial offerings that are changing the investment world, the D.C. Bar recently hosted a CLE course by Eric L. Guthrie, director of training programs for the Government Blockchain Association and author of the award-winning book Blockchain or Die: Learn to Profit From Cryptocurrencies and Blockchains.

On September 1 the Superior Court of the District of Columbia issued Administrative Order 21-11 authorizing the Criminal Justice Coordinating Council (CJCC) to inspect, compile, and analyze data regarding programming provided by the Department of Youth Rehabilitation Services.

The Superior Court of the District of Columbia issued Administrative Order 21-10 on September 1, authorizing Ayuda employees who are not members of the District of Columbia Bar to provide pro bono and low bono legal services in the court’s Family Court, Domestic Violence Division, and Small Claims and Conciliation Branch within the Civil Division.