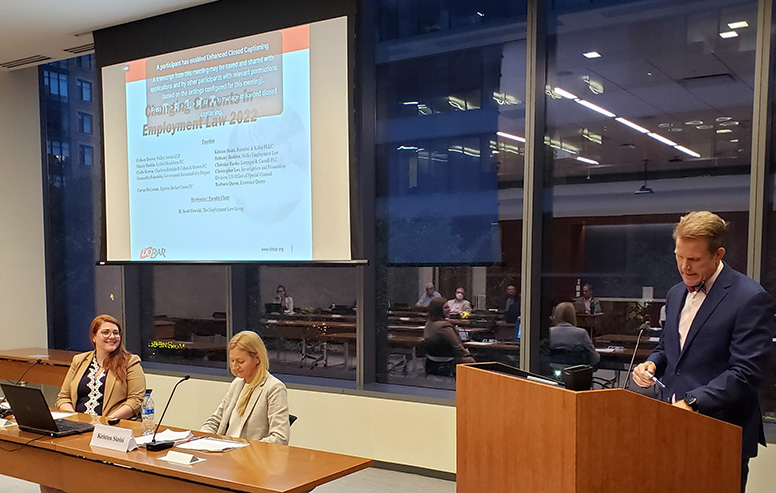 Hybrid work arrangements as well as new regulations and rulings regarding data access, joint employment, and non-compete agreements have the employment law field in a state of flux. This fluidity was underscored at the D.C. Bar’s annual “Changing Currents in Employment Law” series of panel discussions on October 25 moderated by R. Scott Oswald of the Employment Law Group.

Former Georgia police sergeant Nathan Van Buren used his credentials to run a license plate search and sell the information to a third party. Sinisi said the Court did not base its decision on Van Buren’s motive for accessing workplace data, but rather “on a ‘gates up or gates down’ inquiry.”

Brown said the case “fundamentally changed the landscape for [CFAA], and in particular for employers’ and employees’ access to information.” She drew attention to footnote 8 of the Court’s opinion — “For present purposes, we need not address whether this inquiry turns only on technological (or ‘code-based’) limitations on access, or instead also looks to limits contained in contracts or policies”) — noting that its implications “could have significant impact for . . . employers trying to write policies that protect their data assets.”

In the panel “Joint Replacement: The Shifting Standard for Joint Employer in Labor and Employment Law,” Maury Baskin of Littler Mendelson P.C. and Brittany Haddox of Strelka Employment Law discussed the uncertain definition of “joint employer” under the Federal Labor Standards Act (FLSA); the National Labor Relations Act; the 2020 regulations that were rescinded by the Biden administration in 2021; and interpretations by Virginia, Maryland, and the District of Columbia.

Under the FLSA, joint employment, as opposed to an independent contractor situation, means that an employee can have two or more employers who are jointly and severally liable for wages due. Joint employer status depends on whether multiple persons are “not completely disassociated” or “acting entirely independently of each other.” Uncertainty regarding indemnification and liability arises from shifting federal jurisprudence in interpreting the definition.

Baskin said that “supervision” is usually a very important factor in defining an employer, but courts like to look at the “tally of circumstances.” Central cases include the Ninth Circuit’s 1983 decision in Bonnette v. California Health & Welfare Agency, with its four-part test, and the Fourth Circuit 2017 construction industry case of Salinas v. Commercial Interiors, which offered a six-factor test. Baskin noted that the Salinas test allowed for determinations of joint employment based on “not just who controls and supervises, but also who directs.”

“It is not just hiring and firing but who has the power to hire and fire” in addition to shared ownership and ownership of the premises, Baskin said.

In the panel discussion on new limits on the use of non-compete agreements, Carla Brown of Charlson Bredehoft Cohen Brown & Nadelhaft P.C. and Christine Burke of Lorenger & Carnell PLC examined non-compete trends in state and federal law and directives at the executive level, such as President Biden’s Executive Order on Promoting Competition in the American Economy.

Brown and Burke also tackled the District’s new non-compete law, which became effective October 1, 2022, and bans non-compete provisions for covered employees. Highly compensated employees (those earning more than $150,000 per year), medical specialists making more than $250,000, and all broadcast employees, regardless of earnings, are exempt. In addition, the act allows provisions that protect employers from disclosure of confidential information.

In interviews with the D.C. Bar, Brown spoke about why she thinks non-competes are unnecessary today. “We are in the middle of the Great Resignation. It is the first time that the people [with] demand, the employers, have less power than people giving the supply, the employees,” Brown said. “I think it is good for the economy, it is good for commerce, that employees who have something to offer are not going to work at companies that have restrictive non-competes. They have the bargaining power to take better offers or to not work at all. From that perspective we really should be eradicating non-competes.”

While the new D.C. non-compete law has been significantly pared back from its original version, Burke said it is still “a very large departure from what it was before, in terms of restricting the number of employees who can even be subject to non-competes at all.”

“It is very important for employers to pay very close attention to the details [so] that they are in compliance with the D.C. law,” Burke added.

In a separate interview, Oswald highlighted two central takeaways from the discussions. First is “the notion that companies now are simply forced to have hybrid workspace,” and second, that employers have to readjust as employees return to the office after getting accustomed to remote work.

Oswald said that at next year’s CLE, he expects pay transparency to be highlighted, especially as “more and more states are requiring employers to articulate . . . what they are paying employees.”

“Employees in classes that maybe are not as perceptively influential in the workplace — moms coming [back] into the workforce, new employees coming into the workforce, immigrants — will actually know what their colleagues are making and if there is a significant disparity based on things like race or gender,” Oswald said. “And ultimately as these [laws] sweep the nation, I think they will revolutionize how employers pay their employees.”

From Chevron to Crypto: D.C. Bar Tax Conference Tackles the Latest in Regulation and Legislation

More than 350 attendees gathered at the D.C. Bar and online for the 2023 Tax Legislative and Regulatory Update, the Bar’s annual comprehensive look at current and emerging issues in tax law.