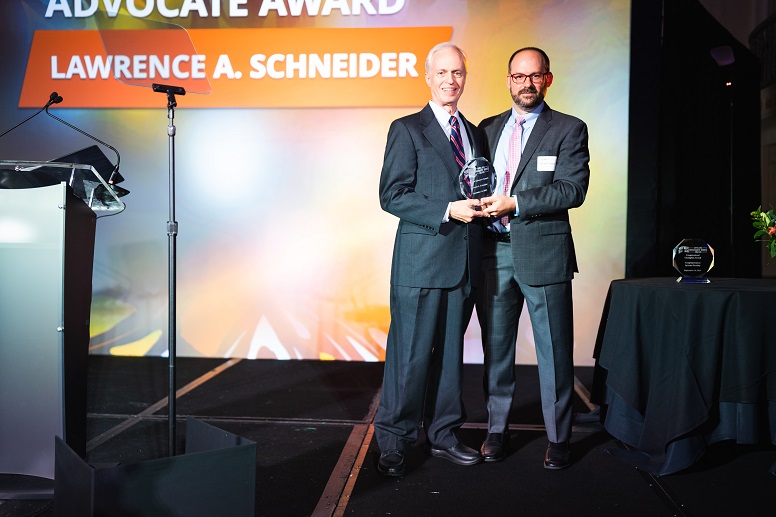 “Larry Schneider has generously given CAIR Coalition his time, wisdom, and unwavering support for over two decades. He has represented our clients, helped to launch the Immigration Impact Lab, and continues to chair our Legal Advisory Committee,” said CAIR Associate Director Michael Lukens. “We are grateful to have had Larry on our side for so many years and look forward to working with him for many more.”

Schneider was among individuals and organizations recognized at the coalition’s Focused on Freedom Awards Ceremony & Reception at the Mayflower Hotel for their advocacy on behalf of immigrant children and adults facing detention and deportation.

Other honorees included U.S. Representative Don Beyer of Virginia for his support of the Development, Relief, and Education for Alien Minors Act as well as for comprehensive immigration reform; Baker Botts L.L.P. and Paul Hastings, LLP for their efforts representing detained adults and children, respectively; and Morgan, Lewis & Bockius LLP for its impact on justice.

Schneider developed and continues to lead Arnold & Porter’s extensive pro bono immigration practice while leading the firm’s international trade practice for many years. His 45 years at the firm included representation of clients in a wide array of contexts from litigation to arbitration and in matters that related to international trade, customs, legislation, and policy issues.

The Immigration Reform and Control Act provided relief for a large number of immigrants, but D.C.-area organizations did not have sufficient resources to assist all of them in the application process. Schneider led efforts to enlist law firms to help local organizations provide representation.

Such reform was long overdue, Schneider said. “The [act] provided relief for many people, but since that time there has been no similar legislative action, and things have gotten a lot worse in terms of the backlog within the immigration system and in other significant areas,” he said in an interview with the D.C. Bar.

In December 2021, Schneider was part of an Arnold & Porter team that assisted the CAIR Coalition and others in asking the Executive Office for Immigration Review (EOIR) within the Department of Justice to make records of immigration proceedings available to attorneys and their clients more quickly and directly. As a result, EOIR issued a new nationwide policy expanding access to legal records. Previously, those seeking records needed to file a Freedom of Information Act request, a time-consuming process.

Arnold & Porter attorneys were among the first to work with the CAIR Coalition to assist detained individuals. “We focused on the detained, in part, because it requires more resources than an individual attorney can typically put into one of these cases,” Schneider said, noting that the tight timetables create significant obstacles to representation for detained individuals.

In recent months, Schneider and other Arnold & Porter attorneys have helped those seeking to escape Taliban rule following U.S. withdrawal from Afghanistan, filing 15 asylum applications and submitting applications for visas and refugee status for a number of those who have not yet managed to escape the country.

As chair of the CAIR Coalition’s Legal Advisory Committee, Schneider leads collaborative efforts with law firms and pro bono attorneys to maximize their impact on behalf of the clients they serve. “At the end of the day, it all comes back to the clients,” Schneider said. “It’s about helping the clients through what is, quite literally, a life-or-death situation. Those sent back home may face torture, persecution, and death.”

“Representation makes a difference,” Schneider said. “Representation triples the chance of obtaining relief from deportation, and yet this is one of the problems with our system; a large number of individuals do not have representation and have to work through the system on their own.”

Schneider said he still has the card sent to the firm years ago by an Ethiopian client who had been persecuted and threatened with death for their Eritrean nationality. The card, which Schneider shows to new attorneys to encourage them to pursue pro bono immigration representation, reads: “For all the good things you do, for being all the good things you are, thank you. Because of you my life is changed, and I am free. Because of your help, I am safe, and my future is bright. Thank you.”

Schneider’s work has also involved a significant amount of scholarship relating to immigration policy, including leading an Arnold & Porter team that produced “Reforming the Immigration System: Proposals to Promote Independence, Fairness, Efficiency, and Professionalism in the Adjudication of Removal Cases,” published by the ABA. That 2010 report and its 2019 update provide a comprehensive review of the U.S. immigration system, identifying issues impacting the ability of applicants to receive swift and fair adjudication of their cases and presenting recommendations for the immigration system’s reform and improvement.

Schneider’s work has been recognized throughout the legal community. He was honored by the D.C. Bar International Law Section (now Community) with its Outstanding International Law-Oriented Community Service and Public Outreach Work in 2003; by the National Law Journal with its Champion & Visionary award in 2010; and by the Washington Council of Lawyers with its inaugural Legacy Award in 2013. He was inducted into Ayuda’s Hall of Fame in 2014.

Each year the D.C. Bar Judicial Evaluation Committee invites Bar members who have appeared before certain selected judges on the D.C. Court of Appeals and D.C. Superior Court to provide feedback to help improve judges’ performance and further the courts’ commitment to the administration of justice. This year’s evaluation period runs from November 15 to January 13.