On March 30, the Asian Pacific American Bar Association of the Greater Washington, D.C. Area, Inc. (APABA-DC) hosted a virtual panel discussion that addressed the alarming surge in hate crimes against Asian Americans and Pacific Islanders and the government’s role in combating these acts of violence.

The speakers shared their thoughts about the recent spate of violence against the Asian community, including the March 16 Atlanta spa shootings that left eight people dead, including six women of Asian descent, and the March 29 brutal attack on an elderly Asian woman in Manhattan. 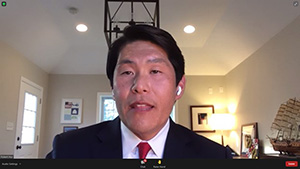 “It makes me literary sick to my stomach. When I read about the ages of some of the victims, I immediately thought of my own mother,” Hur said. “This is the first time that I am actually concerned about my elderly parents walking around in this country.”

Austin said the government needs to start looking at reported hate crimes beyond searching if the perpetrator used racial epithets, read racists books, or made any racist statements online. “The important thing to note is that approximately 50 to 100 hate crimes are prosecuted federally across this country,” Austin said, although more than 200,000 hate crimes occur in the United States, citing data from the Bureau of Justice’s National Crime Victimization Survey. 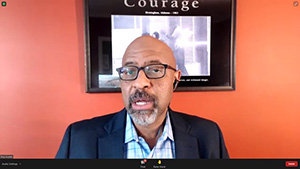 “There is a debate on whether hate crimes matter,” Austin said. “Should it matter if a person commits a crime because of [the other] person’s race [or] nationality? It 100 percent does. It matters because it’s the truth. We as a country has to look back at its history and look at the times when we have treated people differently on the accord of their race, religion, national origin, or whatever.”

Austin also cited 18 U.S.C. § 245, which makes it a federal crime to willfully cause bodily injury, or attempt to do so using a dangerous weapon, to a person engaged in federally protected activities like voting and working because of that person’s actual or perceived race, color, religion, or national origin; 42 U.S.C. § 3631, which involves criminal violation of one’s fair housing rights; and 18 U.S.C. § 241, a conspiracy statute used when two or more people are engaging in the violation of a person’s constitutional rights.

However, Hur noted that currently there is no domestic terrorism statute in the United States. “There is a series of international terrorism statutes, but not one for domestic terrorism,” he said. Instead, certain jurisdictions, such as the District of Columbia and Maryland, have extended sentencing of those convicted of hate crimes. “At least under Maryland law, the practical effect of sentencing is that if it’s a felony, the maximum penalty gets kicked up to an additional 10 years,” Hur explained. “If there’s death resulting, the maximum penalty gets kicked up an additional 20 years.”

“Depending on what the judge does, there actually may not be any more time to serve in prison and there is no mandatory minimum for the additional sentencing for the hate crime,” Hur added. “So, the actual practical effect could be limited.”

Underreporting of Hate Crimes
On March 30, Attorney General Merrick Garland announced that the Department of Justice will be administering a 30-day internal review to determine how the agency can bolster tracking and prosecution of hate crimes.

The panelists agreed that hate crimes are overwhelmingly underreported, citing fear of retaliation and mistrust of government as among the reasons why many victims choose not to report crimes committed against them.

“We estimate somewhere 6,000 or 7,000 hate crimes reported to the FBI every single year. We publish those numbers as if they are meaningful,” Austin said. “First of all, that comes from 18,000 law enforcement agencies in this country. About 15,000 bother to report on hate crimes. But if you look behind those numbers, only about 2,000 actually report even one hate crime at any given year.”

With lack of accurate data, “we don’t have any sense of the problem,” Austin added. “But if we realize that we have a hate crimes problem, people will take it seriously and actually do something about it.”

An analysis by the Center for the Study of Hate and Extremism at California State University, San Bernardino, revealed that crimes targeting Asian people in 16 of the largest cities in America rose by nearly 150 percent in 2020 — from 49 to 122. 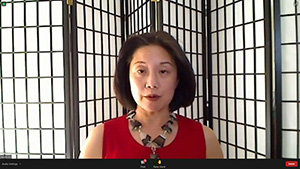 APABA-DC and several other bar associations across the country condemned the Atlanta shootings and denounced the “irresponsible rhetoric” against the Asian American and Pacific Islander community.

On March 19, the D.C. Bar’s Board of Governors issued a statement expressing grief over the horrific murders in Atlanta and affirming its commitment to upholding the rule of law and increasing access to justice for all.

“These brutal killings, together with the hatred and bigotry directed at Asian Americans throughout history — and most recently, over the course of the pandemic — remind us how essential the rule of law is to the most marginalized among us,” the Bar said.

“Racist attacks on our fellow Americans must not be tolerated,” the ABA said in its March 31 statement. “People need the protection of the government and the law. But we all bear the responsibility and moral duty to stand up for our neighbors and ensure they are safe and respected.”

Austin said the country has to demand better from its leaders, citing the cumulative impact of name calling and harassment targeting a specific group of people. “First it was the anti-immigrant stuff. And then it was anti-Asian related to COVID-19. We have to look at this very seriously because this is what it leads to,” Austin said, referring to rise in anti-Asian violence during the pandemic.