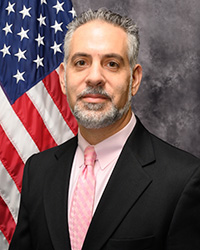 Chad T. Sarchio, an associate chief counsel at the U.S. Drug Enforcement Administration (DEA), has been elected president-elect of the D.C. Bar for the 2020–2021 term. Sarchio will assume office at the beginning of the 2020-21 Bar year and serve in that post for one year before becoming president; he will continue in office a third year as immediate past president. With Sarchio’s installation, incumbent President-Elect Geoffrey M. Klineberg will become the Bar’s 49th president. Klineberg is a partner at Kellogg, Hansen, Todd, Figel & Frederick, P.L.L.C.

Sarchio has served as associate chief counsel at the DEA’s international and intelligence law division since 2006. He’s also a professorial lecturer of law in trial advocacy and pretrial practice at The George Washington University Law School.

Reacting to his election, Sarchio said he will approach his position with a deep sense of responsibility. “I’m incredibly humbled to have the opportunity to serve the Bar and to face the challenges that lie ahead in the coming cycle. It’s not lost on me what a tremendously important task lies ahead. There is so much unknown and unknowable about our present situation. I’ll rely on all of my strong relationships with Bar members to provide solutions that will reach the broadest possible cross-section of our community,” Sarchio said.

From 2000 to 2006, Sarchio was a federal prosecutor at the U.S. Attorney’s Office for the District of Columbia. During that time, he prosecuted hundreds of felony and misdemeanor cases. Sarchio also conducted in excess of 50 bench trials and 21 jury trials, as well as numerous motions and preliminary hearings. He worked as investigative counsel during the seven-month Senate investigation into preparations for and response to Hurricane Katrina.

A graduate of Duke University, The George Washington University Law School, and the National War College, Sarchio began his legal career in active duty with the U.S. Army Judge Advocate General’s Corps. In that capacity, he provided legal assistance to hundreds of soldiers and their family members at Fort Bragg, North Carolina; investigated and negotiated more than $3 million in claims as the senior foreign claims commissioner for Bosnia; and served as military legal counsel to the Army Audit Agency.

From 2000 to 2019, Sarchio served in the JAG Reserves, where he rose to the rank of lieutenant colonel in 2012. In the Reserves, he was a military judge for three years, directed a judicial operations support team, and represented soldiers accused of misconduct, crimes, and other malfeasance.

Also elected to one-year terms were, as secretary, Diane A. Seltzer Torre of The Seltzer Law Firm, and, as treasurer, Shaun M. Snyder of the National Association of State Treasurers.

Elected for two-year terms on the ABA House of Delegates were Lorelie S. Masters of Hunton Andrews Kurth LLP, Laura A. Possessky of the Corporation for Public Broadcasting, and Lucy L. Thomson of Livingston PLLC.

Of 81,966 D.C. Bar members who were eligible to vote, 7,185 members cast ballots for an 8.77 percent overall turnout. A complete breakdown of the election results follows.

All newly elected officers, board members, and delegates will be honored during the D.C. Bar’s virtual 2020 Celebration of Leadership on July 30.

In addition to these Bar leaders, elected D.C. Bar Communities leadership is as follows:

About the District of Columbia Bar

Established in 1972, the District of Columbia Bar’s mission is to be a leader in the legal profession, empower individuals, enhance member value, provide public service, and foster connections within its community. With more than 110,000 members in 50 states and 80-plus countries, the D.C. Bar is the largest unified bar in the United States and provides access to justice, professional services, and award-winning continuing legal education.