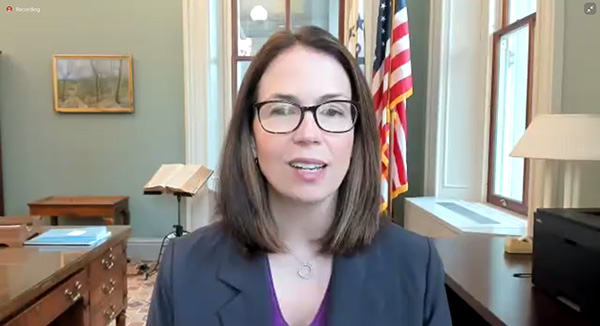 Lily L. Batchelder, assistant secretary for tax policy at the U.S. Department of the Treasury, presented the keynote address on the latest developments in the nation’s efforts to support the intergovernmental Organisation for Economic Co-operation and Development (OECD). Founded to stimulate economic progress and free trade, the OECD is working to ensure the fair taxation of multinational corporations.

The United States is among the 141 countries and jurisdictions collaborating on OECD’s 15-measure Inclusive Framework on Base Erosion and Profit Shifting (BEPS) to reform international taxation rules that ensure multinational corporations pay their fair share of taxes wherever they operate. BEPS refers to the exploitation of gaps and mismatches in tax rules among countries in order to create corporate tax shelters, allowing companies to shift their profits to jurisdictions with the least tax exposure, eroding the tax base of the countries in which the money was earned.

The two pillars of the BEPS plan call upon members to ensure a fairer distribution of profits and taxing rights among countries with respect to the largest multinational enterprises (MNEs) and introduces a global minimum tax rate of 15 percent for MNEs with annual revenue over 750 million euros.

Batchelder said that participation in the Inclusive Framework on BEPS is valuable for many parties. “Workers will benefit significantly because it will ensure that the owners of capital fairly share the burden of financing government investments, but it will also bring important [advantages] to U.S. businesses. Small businesses will benefit because they will no longer be at a competitive disadvantage relative to large multinationals that can shift profits on paper to low tax jurisdictions, and our largest corporations will benefit too because they no longer will be based in the only country that formally requires them to pay a minimum tax on their foreign earnings.”

The implementation of a BEPS framework is not without its challenges, however. Batchelder indicated that creating an equitable international tax system would necessarily involve strengthening the Internal Revenue Service (IRS). She pointed to two additional challenges the agency currently faces. “First, the pandemic, of course, forced the IRS to adjust staff levels and operations at the same time as it was providing critical support to [relief funds for] families without the resources to do either. And second, [there is] systematic underfunding.”

A plenary session following the keynote presentation looked at progress on the BEPs framework, in which representatives of the U.S. and U.K. treasury departments, the director of the Center for Tax Policy and Administration at OECD, and attorneys from PricewaterhouseCoopers LLP and Deloitte Tax LLP discussed the program’s adoption and implementation.

Breakout sessions addressed other issues in which the tax code intersected with the public interest. One morning session reviewed the status of tax incentives available to companies investing in renewable/green energy. A panel that included Robert Andres, senior policy advisor for the U.S. Senate Finance Committee, and Alice Lin, budget and tax policy advisor for the U.S. House Committee on Ways and Means, discussed the green incentives in the Build Back Better Act’s reconciliation bill.

Andres indicated that the bill, necessary to fund the Build Back Better Act, would refresh the renewable and green energy tax credits that have been facing progressive phaseouts since the issuance of the Consolidated Appropriations Act and Protecting Americans from Tax Hikes Act of 2015. Since that time, tax credits for renewable and green energy have failed to gain traction, according to Andres, who indicated that if the reconciliation bill is unsuccessful, the current political environment leaves significant uncertainty regarding the incentives’ future.

“We’re in an election year and getting closer and closer to the midterms,” Andres noted. “To the extent that we don’t do a reconciliation bill this spring or early summer, you’re likely not looking at these topics until after the election,” he said. “We’re quickly running out of calendar here.”

The bill passed the House, and Lin said that members are committed to the bill’s success. “The House went through a long process, and because of that process they feel very invested in the momentum surrounding the bill,” she said. “It was not an easy task to get the bill out of the House. It not only required bridging differences between progressives and moderates in the House, but also included a pre-conferencing process with our colleagues in the Senate and with the administration to get ourselves as much on the same page as we could.”

The coming election cycle that Andres raised as a ticking clock also serves to motivate the interest and support of those in the House. Lin said, “As they look toward November, I think they’re looking forward to going home and being able to talk about their accomplishments.”