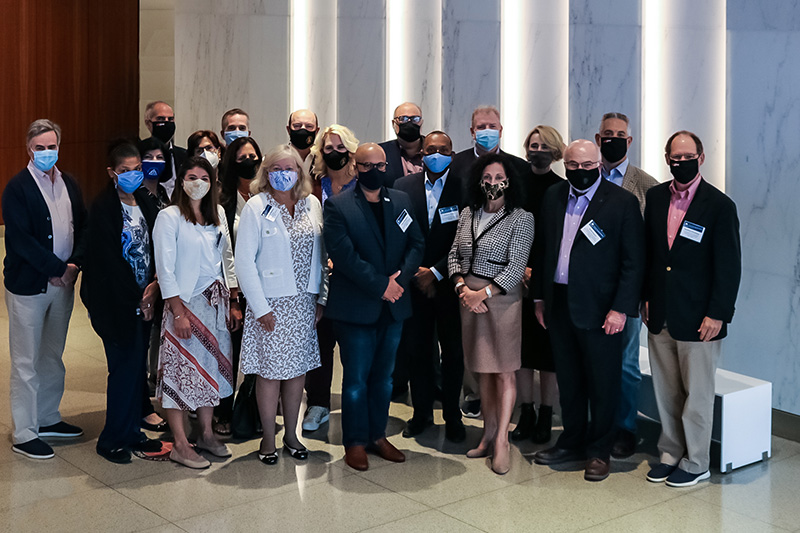 Mid-Atlantic bar leaders pose for a group shot in the lobby of the D.C. Bar headquarters.

On September 30 the D.C. Bar welcomed state bar leaders from Delaware, Maryland, New Jersey, New York, and Pennsylvania for the two-day 2021 Mid-Atlantic Bar Conference. The hybrid event featured in-person activities around the District and presentations on improving access to justice, the legal profession, and service to bar communities. In-person attendees were required to present proof of COVID-19 vaccination as part of the registration process.

The new virtual attendance option and the vaccination requirement reflected the topic on everyone’s minds: stress and other impacts of the COVID-19 crisis on bar members. In the session “Wellness in the Legal Profession: Developing Policies for Balancing Career, Personal Health, and Well-being,” led by the Pennsylvania Bar Association and the D.C. Bar, attendees explored an area of concern that existed before the pandemic and has become increasingly important as many struggle with the mental effects of the outbreak.

Pennsylvania Bar Association President Kathleen D. Wilkinson has made wellness a focus of her leadership. She described a wide array of virtual wellness programs at her bar, including a virtual walk on the beach, virtual wine and chocolate tastings, planting workshops, and other events intended to help attorneys. She says that membership increased as a result of these offerings, which helped develop community and, in the case of the tasting events, also supported local businesses.

Scott M. Karson, immediate past president of the New York State Bar Association, also spoke about the benefits of virtual wellness programming. “We did a lot of those things at the New York Bar, and in a lot of ways we had the most active year in recent memory. As far as members go, we may have had more member engagement than ever before,” Karson said.

D.C. Bar President Chad T. Sarchio drew attendees’ interest when expressing pride over the D.C. Bar’s five full-time staff counselors available to attorneys, judges, and law students in the District. “I feel obliged to brag for a second. The Lawyers Assistance Program at the D.C. Bar has five dedicated counselors. They are fabulous. They’ve put on a number of helpful presentations, and they are also there to provide services to our members. Their professional assistance is an important aspect of what we are offering,” Sarchio said.

Bar leaders raised a common concern regarding the disparate impact of mental health risks on women attorneys. “ABA studies and other studies have shown that during the pandemic, women in particular left the profession at far higher rates,” Wilkinson said, and minority lawyers have also left the profession at disproportionately high numbers.

CEO Robert Spagnoletti said that internal practices at the D.C. Bar have been designed to encourage diversity. “We try to model the things we are talking about,” he said, remarking on deliberate efforts to ensure diverse applicant pools.

More than 75 percent of new hires at the Bar over the past two years were diverse candidates, Sagnoletti said. “We are two-thirds women. Our Board of Governors is two-thirds women, and it’s an incredibly diverse group,” he said. Efforts included ensuring that nominating committees produced diverse candidates. “You’ve got to be really intentional, and you need to work really hard at it.”

On diversity on the bench, Mark Vavala, executive director of the Delaware State Bar Association, told the story of how a personal vendetta has resulted in pressure to increase diversity within the state’s judiciary. Vavala said anger over a Court of Chancery decision led a billionaire entrepreneur to found the Citizens for a Pro-Business Delaware, an organization that has launched a campaign against the Chancery Court for its lack of diversity.

The high-profile controversy has driven recent efforts to diversify the court, though “the general feeling is that there is a lot of work to do, especially within our bar,” said Vavala, a retired Superior Court of Delaware commissioner. He also described difficulties recruiting non-white judicial applicants in Delaware because rising demand for diverse talent has presented qualified candidates, both in state and in neighboring jurisdictions, with a wealth of opportunities that provide more generous compensation than Chancery Court positions.

“Attorneys of color go elsewhere,” Vavala said. “It’s not hard to look right up I-95 and go work in Philadelphia for three times the salary. It’s not enticing to be a judge in Delaware.”

Vavala said that Delaware Bar President Kathleen M. Miller, in conjunction with the state’s chief justice, lobbied the National Center for State Courts to have Delaware designated for a flagship program to develop diversity in the legal system through recruitment and retention. “I don’t think it’s an overt kind of racism that keeps someone from staying in Delaware,” Vavala said, “but I think there’s always, in my mind, something that doesn’t support people of color, and that’s what needs to be improved.”

The Delaware Bar also developed programs intended to create a more hospitable environment, including a new clerkship opportunity for diverse law students in bankruptcy and federal courts. “We’re now seeing people coming in,” Vavala said. “We need to create an environment that keeps them there.” 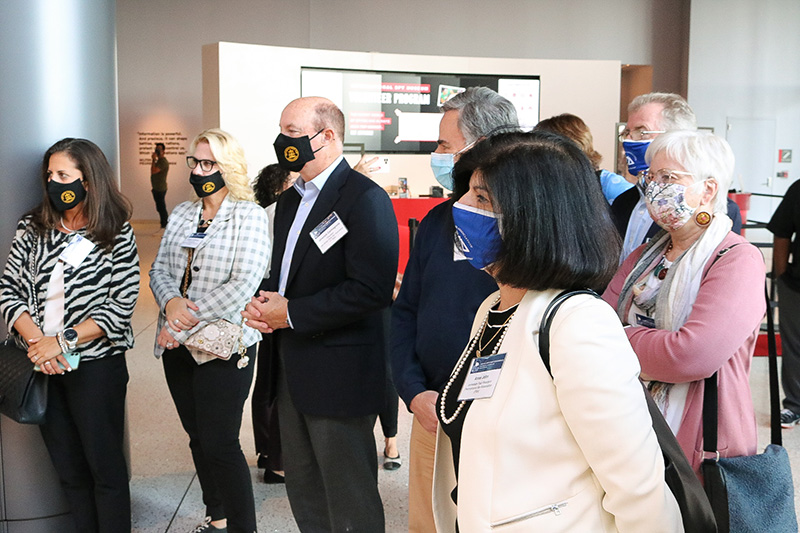 Office Reentry & Vaccine Mandates
Following a brief recess, the conversation turned to state bar vaccine mandates. T. Andrew Brown, president of the New York State Bar Association, described the deliberative and bureaucratic processes that led his bar to implement a vaccine mandate. He said that the intensity of the COVID-19 pandemic helped empower the bar to act decisively on the issue.

“New York was at the epicenter, and for a long time all the nightly news featured New York and all the problems,” he said. “I think if you have that as your backdrop, it’s a lot easier for people to accept things. It would be an odd occurrence to talk to someone in New York who does not have a family member, or a coworker, or someone very close to them in some way [who] is not with us anymore.”

The discussion then transitioned to hybrid programming and office reentry, topics generating greater disagreement among bar leaders than elsewhere. Angela C. Scheck, executive director of the New Jersey State Bar Association, says her bar has implemented a complete return to the office unmasked, resisting pressure among staff to offer hybrid options and rejecting a phased reentry.

The New York State Bar Association took the same route, with Brown citing factors such as productivity and staff morale under hybrid systems for its decision to go back to in-person operations. Initial discussions around phased reentry were met with resistance, Brown said.

Spagnoletti, on the other hand, defended the D.C. Bar’s decision on a phased return to the office and potential hybrid work models by saying that the organization has not experienced performance or morale issues since going virtual in March 2020. He also pointed to the District’s mask mandate and uncertainty surrounding the Delta variant as justifications for the Bar’s decision to proceed with caution.

Like the D.C. Bar, the Pennsylvania Bar Association has opted for a soft office reopening that has been pushed back on account of the Delta variant. Executive Director Barry M. Simpson, who joined the conference remotely, said his state has seen an exponential increase in COVID-19 cases and a certain percentage of its population remains unvaccinated.

Experts Explore the Tensions Between Cryptocurrency Regulation and Innovation

On October 12 the D.C. Bar Corporation, Finance and Securities Law Community brought together a group of key figures in cryptocurrency and financial regulation to discuss the delicate task of introducing regulatory structures to the digital financial marketplace.

For civil rights attorney Michelle Coles, her response to righting the past and present wrongs of racial injustice was to create a poignant coming-of-age story that highlighted true inequalities thrust upon African Americans since the abolition of slavery.

On October 7 the Superior Court of the District of Columbia issued Administrative Order 21-12 authorizing the Criminal Justice Coordinating Council (CJCC) to inspect, compile, and analyze data and information from law enforcement records provided by the Metropolitan Police Department.

Stephen M. Feldman's latest book, Pack the Court! A Defense of Supreme Court Expansion, delivers on its titular promise in a text that examines the historical, analytical, and political arguments in favor of court packing.