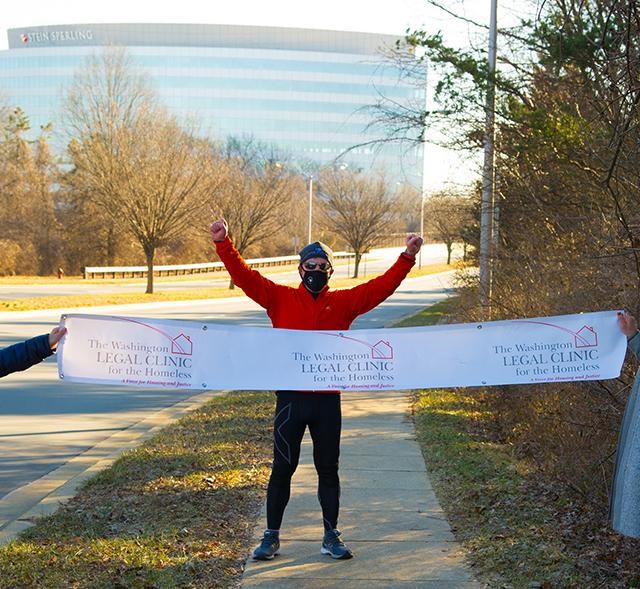 Jeffrey M. Schwaber could have easily spent his 60th birthday enjoying a piece of cake and reflecting on his accomplishments. He’s a managing partner at Stein Sperling whose 30-year career litigating complex corporate disputes has earned him the respect and recognition of his peers. Instead, over a 10-day period ending March 3, he ran a total of 61 sub-9-minute miles to raise more than $119,000 for the Washington Legal Clinic for the Homeless.

But this is just the latest leg in a decades-long journey for Schwaber. “I attended law school at Georgetown, on Capitol Hill. I lived on the Hill and I would walk by the CCNV (Community for Creative Non-Violence) shelter to get to school. I was struck by the juxtaposition of the law school and one of the nation’s largest homeless shelters,” Schwaber says. 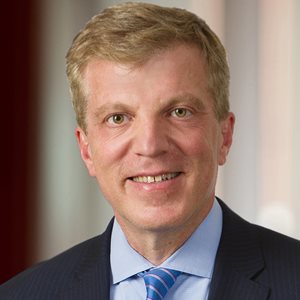 In 1987 he approached Florence Roisman, his housing law professor, with the idea of holding a basketball game between Georgetown Law faculty and staff and members of Congress as a way of raising funds for the District’s homeless. Roisman suggested contacting Patty Mullahy Fugere, who had been instrumental in the establishment of the Washington Legal Clinic for the Homeless just a year earlier.

The result was an annual charity basketball game called Home Court, which generated $42,000 for the Legal Clinic in its first year and has raised more than $10 million over the past 34 years, providing vital funding for the representation of and advocacy for the District’s homeless. Schwaber is still involved with the charity event, primarily in a fundraising capacity. He says that its bipartisan nature has had an enormous value in an increasingly polarized District. “The issue of homelessness and the entitlement to representation and access to justice is something everybody can get on board with,” says Schwaber.

Mullahy Fugere, who continues to lead the Legal Clinic as its executive director, says Schwaber has been a constant in the organization’s efforts advocating for the homeless. “Through the years he has remained by our side, unfailing in his support and in his willingness to use his plentiful connections to broaden that support. In Jeff we have been blessed with a most wonderful companion on the journey toward a more just community,” she says.

Schwaber’s recent birthday run builds upon prior efforts. For his 50th birthday he completed the South Beach Triathlon, one of more than 40 triathlons he has competed to date, and raised more than $50,000 for the Legal Clinic in the process. Although he experienced health setbacks in the intervening decade, and the COVID-19 pandemic frustrated plans to complete another triathlon on his 60th birthday, support from friends and trainers helped him prepare, organize, and execute his 60-mile run to raise $60,000 for the Legal Clinic. Schwaber ended up adding an extra mile and raising $119,000 from 289 individual donors.

“It was pretty remarkable. Looking at the people that I have in my life, the friends and clients . . . the good people . . . I shouldn’t be surprised at all by any of it. It was a remarkable showing of support from some very generous and good-hearted people,” Schwaber says.

But the spotlight should be on the Legal Clinic, Schwaber says. “The work I do raising money, the things people give me praise for doing, pales dramatically in comparison to the work that frontline lawyers who work for the Legal Clinic and who volunteer in the shelters are doing every single day,” he says. “They’re the real superheroes in the story. For me it’s a blessing and a privilege to have found an organization that I can feel so good about spending my time raising money for.”

Asked whether he has set an untenable precedent for himself, he says that if he can manage a 70-mile run in a decade he will. “If I’m still doing this at 70, you had better open up your wallets because I’ll be coming after people,” he jokes. Schwaber says his work supporting the Legal Clinic has been a privilege and the fulfillment of a professional obligation, one that he intends to continue for as long as necessary.

“I really think, as naïve as it may sound, that my true hope and prayer is that there won’t be a need for something like the Washington Legal Clinic for the Homeless in 10 years’ time,” says Schwaber.

Given how many improbably distant finish lines Schwaber has crossed in the past, though, it would be foolish to discount this goal. In the months prior to the onset of the pandemic, he won the Fort Ritchie (Maryland) Triathlon in his age group, qualifying him to compete nationally.