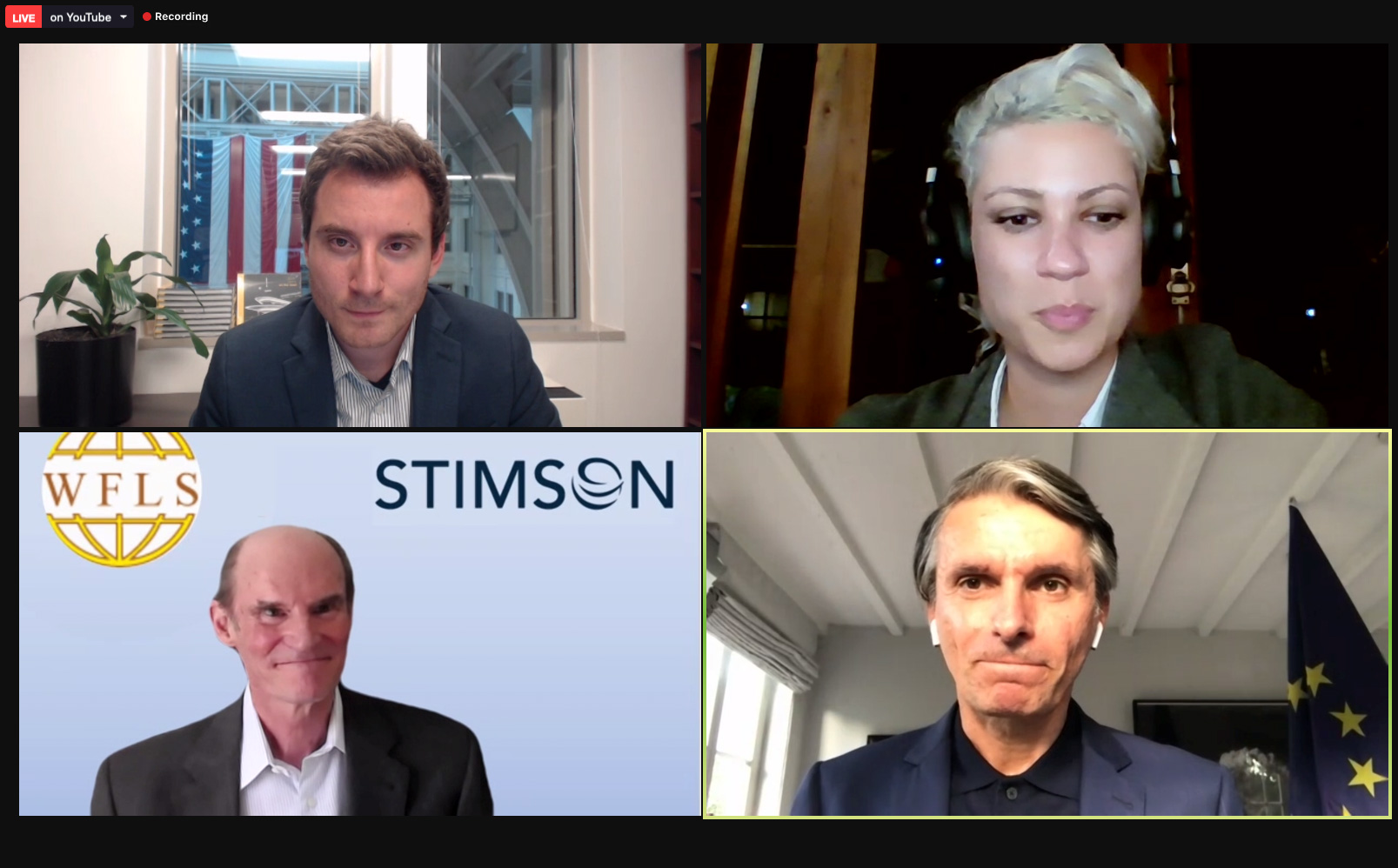 Clockwise from left: Michael Teodori of the Washington Foreign Law Society; Mariana Valente of InternetLab; Peter Fatelnig, minister-counsellor for digital economy policy of the EU delegation to the United States; and Bruce McConnell of the Stimson Center.

On July 14 the Washington Foreign Law Society and the Stimson Center, a nonprofit think tank focused on international affairs, hosted an online forum to discuss international models for regulating social media platforms and internet content. As the U.S. Congress weighs whether and how to revise Section 230 of the 1996 Communications Decency Act, the program explored standards on online accountability being set in Brazil and the European Union.

Mariana Valente, co-director of InternetLab, a research center in Sao Paulo, discussed Brazil’s Marco Civil da Internet, adopted in 2014 as a kind of constitution for the internet. The framework prevents the government from interfering with content or pressuring online platforms or service providers, leaving it up to courts to decide whether certain content should be taken down.

In determining what is misinformation and what is free speech, Valente said “the line is not always so bright” for judges and fact checkers. What’s needed is a mix of government regulation and codes of conduct for companies as well as more “creative pieces of legislation” that address platform architecture, market power, algorithms, and users’ behavior, not just liability, she said.

The European Union is considering the Digital Services Act (DSA), an update to EU internet regulations set in 2000 and primarily concerned with illegal content, but the DSA has become a magnet for a wider debate of multiple issues involving democracy, media and journalism, disinformation for profit, artificial intelligence, and users’ trust.

“Just because we are in front of a very complex problem, and we are not seeing briefly through the problem for a solution, doesn't mean we shouldn't do anything,” said Peter Fatelnig, minister-counsellor for digital economy policy of the EU delegation to the United States. “A lot of things can be done . . . We want to create an ecosystem that deals with problems that go beyond illegal content.”

Bruce McConnell, a distinguished fellow at the Stimson Center and a former U.S. Department of Homeland Security official for cybersecurity from 2009 to 2013, said the world has seen the impact of disinformation on elections and on the uptake of COVID vaccinations during the pandemic. “The platforms find themselves caught in the middle of very powerful forces being required to make crazy judicial decisions on the basis of their terms of service. It's not sustainable for anyone,” McConnell said.

In the United States, Section 230 provides a broad liability shield to social media giants like Facebook and Twitter, as well as to smaller online platforms, for content posted to their sites by users. Written in 1996, critics believe the law fails to address the complex needs of the modern internet. Facebook is calling for updated regulations and lawmakers on Capitol Hill are weighing a re-write.

“We can summarize it in three ways, which is we want a review or reformation of online platform accountability measures to be future-proof, to be values-based, and to be people-centric,” said moderator Michael Teodori, chair of programs at the Washington Foreign Law Society.

The Section 230 forum was the fourth in a series of events jointly produced by the Stimson Center and Washington Foreign Law Society on legal accountability in cyberspace.

Pandemic-Era Job Hunt: How New Attorneys Can Ace Their Interviews

Finding a job is still a competitive process, so new attorneys need to focus on the crucial step of acing their job interviews. If you are about to face a first interview or a callback, it is wise to prepare yourself by following these five tips to impress your interviewers and land the job.

On July 23 the D.C. Bar Communities held the first part of its inaugural Legislative Women’s Collective to help bridge the gender gap in politics by empowering women to get involved and run for office.

On July 20 the D.C. Superior Court Board of Judges issued Rule Promulgation Order 21-05 approving amendments to Superior Court Rules of Civil Procedure 10-I and 30.