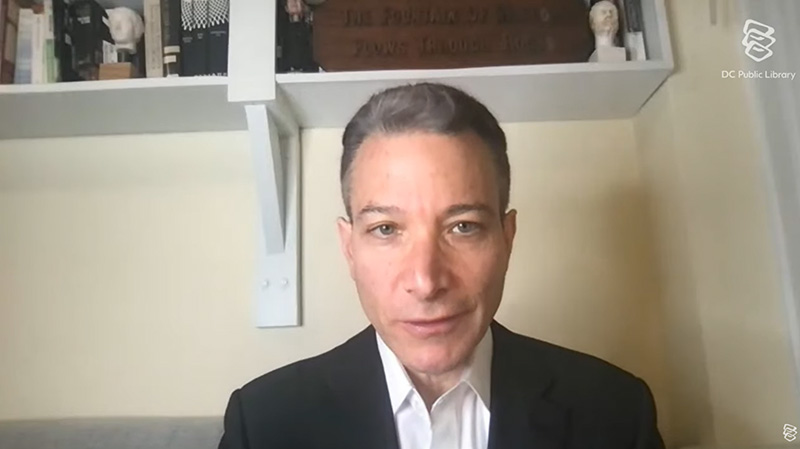 Jeffrey Rosen, president and CEO of the National Constitutional Center, spoke about the history and future of the U.S. Supreme Court at a November 16 event held by the Cleveland Park branch of the D.C. Public Library. Rosen has authored numerous books on the U.S. political system, including his most recent release, Conversations With RBG: Justice Ruth Bader Ginsburg on Life, Love, Liberty, and Law.

His analysis included a brief history of the Court, taking time to discuss how landmark cases such as Marbury v. Madison defined the scope of its authority. Even those who don’t regularly practice in the area of constitutional law may recall how Marbury followed the loss of John Adams to Thomas Jefferson in 1800 and how the case’s outcome was carefully crafted in order to navigate the political minefield. Rosen found parallels between the contentious political environment and the desire of Chief Justices John Marshall and John Roberts to safeguard the Court’s nonpartisan stance through consensus-building and the issuance of narrowly constructed decisions.

Chief Justice Roberts’s attempts to preserve the nonpartisan appearance of the Court, since 2006, has had mixed success, Rosen said, pointing to the unanimity of the Court on many matters and Roberts’s joinder with liberal justices on some highly publicized issues as evidence of his efforts to mitigate the Court’s divisions. As both the chief justice and the swing vote, Roberts has been widely regarded as one of the most influential and powerful justices in recent history, Rosen said.

Roberts’s influence has its limits, however. The current Supreme Court cases of Whole Woman’s Health v. Jackson and Dobbs v. Jackson Women’s Health Organization relate to abortion, an issue on which unanimity is seen as virtually impossible. Justice Clarence Thomas, applying an originalist analysis of abortion, has already indicated that he considers abortion to be outside of the intent of the constitutional framers, Rosen said. He then went on to distinguish Thomas’s views from those of Justices Brett Kavanaugh and Amy Coney Barrett. In the case of Kavanaugh, Rosen referenced a statement by the justice indicating that he is not an originalist, but that he is interested in history, text, and tradition.

Originalists like Thomas analyze the circumstances and intended meaning of statutory language at the time of a law’s creation, Rosen said, while someone like Kavanaugh is more likely to consider the entire history of the culture’s engagement with an issue. Traditions may shift, while originalist analysis does not. Quoting Justice John Harlan’s concurrence in the 1961 Poe v. Ullman contraception case, Rosen said, “tradition is a living thing.” The traditionalist analysis, therefore, is much more likely to contemplate the right to abortion, given the latter-day protection of abortion rights.

Rosen also recalled conversations with the late Justice Ginsburg, whom he counted as a friend, in which she said that the cumulative impact of Roe had made the potential overturning of the landmark case impossible without significant disruption and a public perception of the Court as partisan, which she said Roberts would not want.

Ginsburg herself was critical of Roe. Its reliance on privacy rights was gendered and a result of the involvement of the predominantly male medical profession. She also felt that the case was too broad. Had Roe simply invalidated the Texas law at issue without introducing a series of regulations regarding how laws could be formulated, Ginsburg felt that states would have continued to liberalize, as they had been doing at the time, according to Rosen.

Ginsburg would have used the equal protection clause, rather than privacy rights, to accomplish this, Rosen said. In Ginsburg’s view, the disparate impacts on women rendered the law a form of sex discrimination.

Following a brief analysis of the concept of stare decisis and the obstacles to overruling precedent, Rosen left open the question of how Chief Justice Roberts and the Court will apply the stare decisis tests that constrain the ability to overturn Roe. Arguments have been advanced that the case’s limitations based on the viability of fetuses is incorrect since medical advances have moved the mark, and will continue to do so, and that it is impossible for those with unplanned pregnancies to rely upon the law’s protections since unplanned pregnancies are, by definition, unplanned.

In closing, Rosen called upon attendees to inform themselves by reading the briefs and decisions relating to the cases coming before the Supreme Court. He also touted resources made available by the National Constitutional Center, whose interactive online Constitution includes discussion by leading liberal and conservative scholars, and his podcast “We the People,” whose upcoming episode will cover the Dobbs case in detail.

In recognition of Hip Hop History Month, the D.C. Bar spoke with Alan Page, author of Enter the Wu-Tang: How Nine Men Changed Hip-Hop Forever. Although the book was published in 2014, it makes for a timely rediscovery, considering how interest in the influential Wu-Tang Clan has been resurging.

On November 23 the Superior Court of the District of Columbia issued Administrative Order 21-16 , regarding extension of and additions to its Criminal Justice Act (CJA) Panel of attorneys.

Finding that the COVID-19 pandemic continues to present extraordinary circumstances relating to public health and safety that substantially impair its ability to perform certain functions, the Superior Court of the District of Columbia issued Administrative Order 21-15 on November 19.