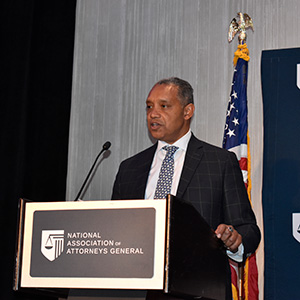 A bipartisan group of attorneys general gathered virtually and in person in Washington, D.C., on September 30 and October 1 for a national summit to address the rise of hate and hate-related violence in the country. The summit, hosted by D.C. Attorney General Karl Racine, is part of Racine’s year-long The People vs. Hate initiative as president the National Association of Attorneys General.

“The goal here — and this is important — is not to put America on trial,” Racine said in his opening remarks. “But what we want to do is put hate on trial over the next two days. I hope to have thoughtful and deep discussions around two extraordinarily horrific events that occurred in our great country.”

Those two events were the 1921 Tulsa Massacre, in which a white mob destroyed a once-thriving African American business and residential district after a white woman accused a Black teen of attacking her, and the bombing of Birmingham’s 16th Street Baptist Church in 1963, which killed four Black girls.

In his speech, Racine said hate crimes across the United States have increased in recent years, citing FBI statistics. He said his office has “spent a lot of time examining different types of hate and extremism,” including the rise of groups such as incels — men who hurt women because of misdirected blame for their celibate status.

Centennial of the Tulsa Massacre
After Racine’s opening remarks, John W. Franklin, senior manager emeritus of the Smithsonian’s National Museum of African American History and Culture, delivered the morning’s keynote address, “From Native Americans to the Tulsa Race Massacre: Understanding Our Interconnected Histories and Our Present.” Franklin is the grandson of one of the massacre’s survivors.

Franklin noted that many of Oklahoma’s early Black residents were descended from former slaves of Native Americans who had been forced west by the federal government. These freedmen became eligible for land allotments. When Franklin’s grandfather, who was a lawyer, moved to Tulsa in February 1921, the Greenwood district was a “prosperous and bustling” section with a row of Black-owned hotels and other businesses such as furniture stores, catering companies, cleaners, real estate offices, jewelry stores, and more than a dozen churches.

Franklin read his grandfather’s account of the massacre, in which he recalled “planes circling in mid-air” that “grew in numbers and darted below.” Franklin’s grandfather remembered hearing “something like hail falling” atop his office, seeing the old Midway Hotel on fire and “sidewalks literally covered with burning columns,” and noting that that city’s fire department was nowhere to be found.

Franklin’s father, historian John Hope Franklin, authored part of the 2001 report by the Oklahoma Commission to Study the Race Riot, which recommended reparations for survivors and their descendants. 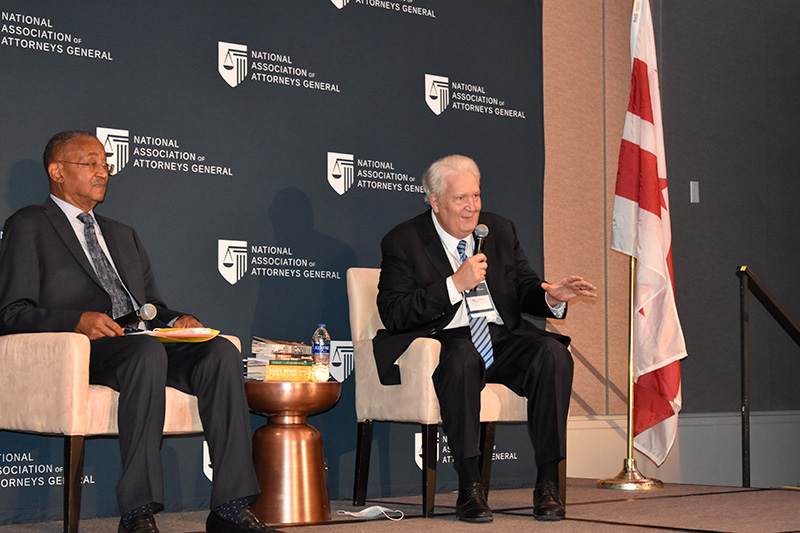 Mike Turpen, former Oklahoma attorney general, joined Franklin for the fireside chat “Learning From Hard Truths to Form a More Perfect Union.” Though Turpen said he learned about the massacre through books, he recalled riding in a car as a 12-year-old with his father, who hinted about the violent episode.

“My father whispered to me what he remembered about the Tulsa race riot,” Turpen said. “That's what he called it before we called it the Tulsa race massacre. And he said, ‘Don't ever speak of this.’ I guess he was embarrassed. Well, that was the beginning of me learning of a 100-year conspiracy of silence.”

Turpen was in attendance when President Joe Biden visited the city in June to commemorate the massacre’s centennial at the Greenwood Cultural Center, where the president said, “All great countries must reconcile with their dark past.”

“Tulsa is coming together,” Turpen said. “It’s trying to own it, fix it, and learn from it.”

16th Street Baptist Church Bombing
Toward the end of the first day of the summit, former U.S. senator Doug Jones and former Alabama attorney general Bill Baxley delivered the presentation “Standing Up for Our Common Humanity: Seeking Justice for Victims and Survivors,” which touched upon their efforts to bring to justice the perpetrators of the September 1963 bombing of the 16th Street Baptist Church.

Jones gave a detailed outline of the motivations behind the bombing, noting that the church was an organizing base for civil rights marches and protests, and spoke about the significance of Brown v. Board of Education and the arrival of the Freedom Riders. Jones also recalled the Children’s Crusade demonstrations in May 1963, which led to violence at the hands of Birmingham police. That incident received national attention, ending after intervention from the U.S. Department of Justice.

“Birmingham was one of the first places in America if you can believe it — to do away with Jim Crow laws,” Jones said. “The Klan was pretty unhappy. They were seeing their segregated life slipping away. [So], the targets were the church because they were the focal point of the [civil rights] movement and the children of Birmingham, both of which have become symbols of the movement.”

Two years after the bombing, which killed Addie Mae Collins, Cynthia Wesley, Carole Robertson, and Carol Denise McNair, the FBI concluded that it was committed by four Klansmen — Thomas Edwin Blanton Jr. Herman Frank Cash, Robert Edward Chambliss, and Bobby Frank Cherry. None of them was prosecuted until 1977, when Chambliss was tried and convicted for the first-degree murder of McNair. Baxley, then Alabama attorney general, reopened the case in 1971.

In 2000 Jones, then U.S. attorney for the Northern District of Alabama, began prosecution of Blanton and Cherry. Family members of the victims were in attendance when their life sentences were handed down.

Experts Explore the Tensions Between Cryptocurrency Regulation and Innovation

On October 12 the D.C. Bar Corporation, Finance and Securities Law Community brought together a group of key figures in cryptocurrency and financial regulation to discuss the delicate task of introducing regulatory structures to the digital financial marketplace.

For civil rights attorney Michelle Coles, her response to righting the past and present wrongs of racial injustice was to create a poignant coming-of-age story that highlighted true inequalities thrust upon African Americans since the abolition of slavery.

On October 7 the Superior Court of the District of Columbia issued Administrative Order 21-12 authorizing the Criminal Justice Coordinating Council (CJCC) to inspect, compile, and analyze data and information from law enforcement records provided by the Metropolitan Police Department.

Stephen M. Feldman's latest book, Pack the Court! A Defense of Supreme Court Expansion, delivers on its titular promise in a text that examines the historical, analytical, and political arguments in favor of court packing.