Kelly Veney Darnell has served as chief operating officer (COO) of several high-profile organizations, including the United Way of the National Capital Area, the Executive Leadership Council, and the D.C. Office of the State Superintendent of Education. Now COO of the Bipartisan Policy Center and current president of the DC Bar Foundation, Darnell says she loves going back to her roots in the government policy space to effect change.

I started in April 2020. The staff went home in March. We had about 90 employees when I started, and we have 150 now. So, we’ve almost doubled in size. [I’ve] had to navigate COVID and reenter the office, while making sure that we were a strong organization. 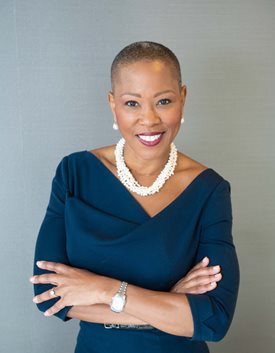 What was it like leading a new organization during the pandemic and having to collaborate with staff that were mostly remote?

If this had been my first chief operating officer experience, it would have been very difficult to navigate the culture, the processes, and building trust. But because this was my fourth job as COO, I knew what the everyday part of the job was. So, all I had to do was get to know the place and people and build trust. That made a big difference for me in this position.

[I] have to be a lot more intentional about doing that when on video because people can’t just stop by my office. But again, knowing the everyday part of the job was really helpful.

In your opinion, what type of person makes an effective COO?

I thought that I’d faced every possible HR or operational issue until COVID. [The pandemic] for many of us was a very difficult situation to navigate. I took all of my COO tools from my toolbox to effectively get through it and come out the other side with an organization whose culture is still intact.

Policy is my great love. I was a Woodrow Wilson fellow coming out of college. We had a choice of going to any graduate policy program in the country — tuition paid with a stipend. I decided to come back home to the University of Maryland. I had been interested in Congress since I was in middle school.

My mother . . . grew up in the foster care system from the age of about nine. She went to college when I was four years old. My dad only had a third-grade education, but he was quite a Renaissance man. With three kids, he told my mother, “You’re a brilliant woman. You need to go to college.”

So, she started at Catonsville Community College in Baltimore. I went to preschool there. She transferred to a four-year school then became a teacher. Her becoming a teacher changed our lives. I don’t think people now hold teachers in the esteem that they should. But for the first time we had insurance; we had dental insurance; we moved to a better neighborhood. We moved from Baltimore to Ellicott City in Howard County, Maryland [when I was 11].

I really believe that education is so important for kids to get ahead. I wanted every kid to have that same opportunity that I had. But for the grace of God, we moved from Baltimore. My parents were very thoughtful about the environment in which they wanted their kids to learn.

My dad was born in 1920. He could not have gone to the University of Maryland. It was not open to Black students at that time. So, interest in access to education and justice has always been at the forefront of what I wanted to do.

At the Bipartisan Policy Center, we’ve been very effective [in] getting legislation passed around climate change, economic policy, election issues — these things that have a real impact on people’s lives.

Describe your experience growing up Black in Ellicott City.

When I got ready to go to college, I wanted to go to a women’s college. And I said, “I’m thinking of Smith College or Wellesley College.” My parents looked at me and said, “No. I think you’re going to Spelman College.”

It was rough growing up in Ellicott City. There were no guys to go out with. The white guys wouldn’t take any Black girls out. It was tough, which is why I now live in Washington, D.C. And I raised my kids in Washington, D.C., because I didn’t want them to feel that sense of isolation that I felt growing up.

After earning your bachelor’s in economics at Spelman, what inspired you to go to law school?

Because I wanted to work in politics, I thought that in order to stay in politics I needed a law degree — even if I didn’t practice. I never intended to practice law when I went to law school.

Describe your experience growing up Black in Ellicott City.

When I got ready to go to college, I wanted to go to a women’s college. And I said, “I’m thinking of Smith College or Wellesley College.” My parents looked at me and said, “No. I think you’re going to Spelman College.”

It was rough growing up in Ellicott City. There were no guys to go out with. The white guys wouldn’t take any Black girls out. It was tough, which is why I now live in Washington, D.C. And I raised my kids in Washington, D.C., because I didn’t want them to feel that sense of isolation that I felt growing up.

After earning your bachelor’s in economics at Spelman, what inspired you to go to law school?

Because I wanted to work in politics, I thought that in order to stay in politics I needed a law degree — even if I didn’t practice. I never intended to practice law when I went to law school.

What was your practice area at Saul Ewing?

I was in the business department. We had about 400 attorneys there, and there were about three Black attorneys. One was a partner and the other two were associates. Just the reality of being there and not having a lot of mentors impacted me. This was about 20 years ago. I left the firm in 2002.

I also had my second kid during that time. The firm was just not an environment where a lot of women associates had kids. So, being a mom and a Black woman was not something I wanted to do as a lawyer. I didn’t want to be the only anymore.

Talk about your ah-ha moment when you realized that practicing law was not your thing.

I think that because I had come from working with the 1996 Atlanta Olympic Games, where I was the federal affairs director — where things were exciting, fast, and a place where I was meeting all of these amazing people, such as having lunch with Bill Clinton — when I got to the law firm, it was so boring. The pace of it was something that I was so unaccustomed to. I had to make a decision if I really want to sit down and study cases.

Now when I talk to students about going to law school, I try to expose them to all of the different ways that they can practice; the profession is not just this myopic thing.

I know a woman who is a partner at a law firm [and] works on sweepstakes in the gaming industry. I know attorneys who are involved with cryptocurrency. I know that some of those interesting practices were there when I came out of law school, but no one told me about them.

So, I encourage law school students to not get limited into thinking that there [are] just three ways of practicing law. So, I guess that was my real ah-ha — the fact that I wasn’t exposed enough to say, “This is what I want my law career to be.”

What is your proudest achievement in your career and why?

My proudest professional achievement was when I went to the Office of the State Superintendent of Education (OSSE). In that position, the largest department under the COO was the school buses. When I inherited them, we were in court receivership. I didn’t know anything about buses. I had probably never managed more than four people before getting that job. All of sudden, I had almost 2,000 employees. And I had to get the buses out of court receivership.

Within two years involving four unions (two involving bus drivers) — and two unions within the call center — I had to get everyone walking in the same direction.

What I learned in D.C. was that you can’t make people do anything. But we got out of court receivership in two years. When I got there, there were employees who were taking bets on how long they thought I was going to last there as COO.

It was rough and tumble. But I learned so much about people. That’s where I really got my chops. So, now as COO, I always focus on culture because of that experience. It’s about learning how to build trust. I had to work with all kinds of people — everyone from bus drivers to attendants. Getting their trust and getting out of court receivership told me that I had that certain extra something that made people follow me. Recognizing that was my greatest accomplishment.

What have been some of your early goals at the Bipartisan Policy Center?

Economic policy is the part of the job that is most important to me. We are half Republican and half Democrat. When I first got there, I wondered, “Why [did] we [have] to work across the aisle? Democracy is not working. This doesn’t make any sense.”

I learned that bipartisanship is really a tactic. If you want laws changed that will remain, they have to be passed in a bipartisan way. My legacy — I hope — is to build a bipartisan racial equity agenda.

I refuse to believe that only one political party cares about racial equity. If we want to make real strides with racial equity, we have to learn how to talk to the other side.

Sometimes that means, will we have great sweeping legislation? Maybe not. Maybe the change will come in small, bite-sized pieces. But as long as there is progress, that’s what we have to strive for. I’m really looking at [it] through economic policy and housing policy. That’s what I hope my legacy is at BRC — and creating awareness on what policy does, especially [for] people of color.

Talk about being president of the DC Bar Foundation board this year.

I’m their first Black president. It’s exciting because when I joined [the foundation] five years ago, the budget was about $5.2 million; it’s now $33 million. D.C. has been at the forefront on access to justice, transforming systems and coordinating stakeholders. We must continue to make people aware of the services that we provide through grants and what is available to the residents of this city. It’s an amazing and impactful organization with a tremendous team.