Webinar Takes a Candid Look at Diversity in the Legal Profession 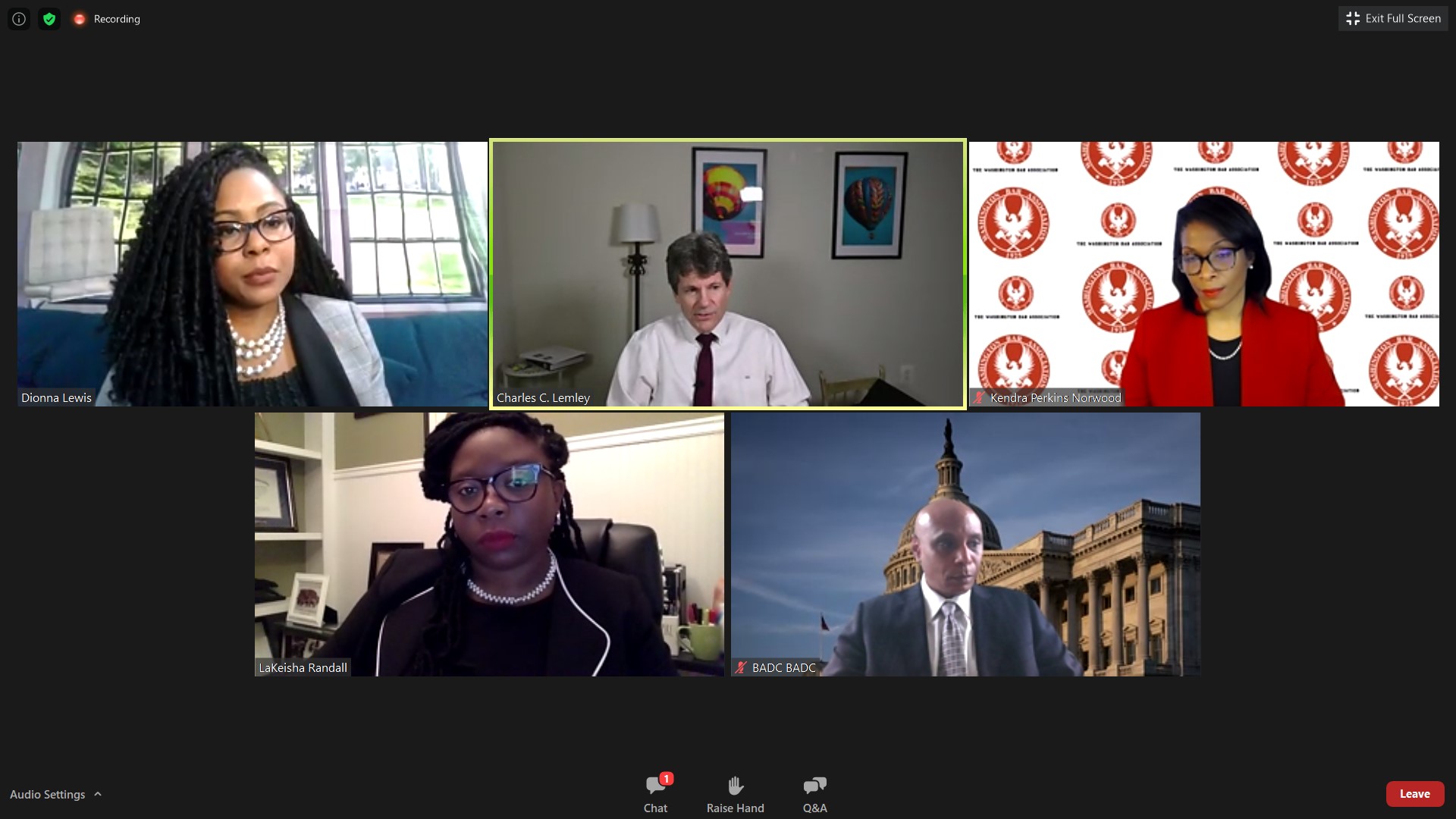 As the Black Lives Matter protests inspire many industries to reexamine the effects of systemic racism, the Bar Association of the District of Columbia (BADC) and the Washington Bar Association scrutinized the legal profession at a Sept. 17 webinar. “An Honest Discussion on Racial Inequality in the Legal Profession” illuminated some of the data concerning lack of diversity in the field and offered personal anecdotes from panelists LaKeisha R. Randall, founding partner at The Randall Firm and Atlanta Life Coaching & Consulting, LLC, and Charles C. Lemley, a partner at Wiley Rein LLP.

Kicking off the webinar, moderator Dionna Lewis, a founding partner at District Legal Group LLC, quoted statistics from the latest “ABA Profile of the Legal Profession.” The percentage of lawyers who are women has been growing slowly and stands at 37 percent in 2020, according to the report.

In terms of racial diversity, the report stated that 86 percent of lawyers in the United Sates are white. “Since 2010 and continuing to the present, only 5 percent of lawyers in the United States have been African American. Only 5 percent have been Hispanic. And over the last two years, the percentage of lawyers who identify as Asian has teetered between 2 and 3 percent. None of these statistics have notably changed over the past decade,” Lewis said.

“The numbers are staggering. There’s an inexplicable complacency among people in the legal profession,” said Lemley. “[While there are] many people who understand that there is a problem and that we need to diversify, there is this idea that we are doing all that we can. It’s just a matter of [better diversity] taking time. And that it will work itself out. But the numbers are showing that the problem isn’t fixing itself. It’s going to take a major effort on all of our parts.”

“It’s important to realize that, as lawyers, we are the arbiters of justice. And, unfortunately, we are really behind other industries regarding diversity and actually making progress,” Randall added. “So as a woman of color, specifically as a Black woman, I think it’s important for me to understand the numbers and create awareness in having those conversations and speaking transparently.”

Randall also recalled the pressure of leaving behind certain aspects of herself in professional environments where she was the only Black lawyer on staff. “We are full people with full lives,” she said. “There were times when, in order for me to rise through the ranks, I couldn’t be my full self. That culture or way of thinking really impacts lawyers personally. The psychology of knowing that you can’t be your full self increases stress.”

As an example, Randall brought up the conundrum of wearing her hair naturally in court when she worked as a corporate lawyer. Touching upon the intersectionality between race and gender, she recalled becoming lead counsel on a case in which she only had three weeks to prepare. After winning the case, one of the partners commented on Randall’s pants suit. “I paused because I wasn’t quite sure where she was going with it,” Randall said. “She later explained that, as a woman trial lawyer, I was no longer to wear pants to the courtroom. After winning my first case as a lead counsel, all this partner saw were my pants. That was an example of the double bind of being a woman and a woman of color.”

The panelists explored the term “implicit bias” and whether it is a cover for racist, sexist, and other -ism behaviors. “I believe ‘implicit bias’ has been a hot-button term for a while,” Randall said. “Unfortunately, in the current times in our society, I do believe that we are just using it as an [excuse] to not address very important things head-on. If you give someone the umbrella to call something ‘implicit,’ they can easily say, ‘Oh, I didn’t know.’ But there are conscious decisions that we make. Particularly in the legal profession, we are held to a higher standard. I think it’s important for us to understand our blind spots.”

During the webinar Lemley  shared a presentation entitled “The Ethics of Diversity and Inclusion.” Its message was that lawyers have strong ethical obligations and the agency to undertake affirmative steps to remedy discrimination, eliminate bias, and promote equality, diversity, and inclusion in the legal profession and judicial system. Lemley argued that meeting the moral obligation to promote diversity also makes economic sense.

Lemley also talked about the ABA’s Formal Opinion 493, which states: that “Besides being advocates and counselors, lawyers also serve a broader public role. Lawyers ‘should further the public’s understanding of and confidence in the rule of law and the justice system because legal institutions in a constitutional democracy depend on popular participation and support to maintain their authority.”

He noted that well over half of states, including the District, have some form of anti-discrimination rules and comments. , though they differ in how closely their language follows the ABA’s Model Rule 8.4(g).

Later in the webinar, Lewis asked the panelists, “How do we achieve greater diversity and inclusion beyond lip service or if it’s even possible?

“I think having diversity [and inclusion] mission statements sounds great. We know that clients expect it. Corporate clients are going to ask for it. But the reality is that it’s simply tokenism,” Randall said. “Sometimes it’s lip service with no intention of ever improving. So, I think we need to foster environments of more candid conversation and candid action.