Presentations noted vaccines’ success in eliminating many gruesome and fatal illnesses such as polio from much of the modern world, but also considered how anxiety regarding vaccination has presented obstacles from the beginning. Several sessions approached the issue of vaccine denial, hesitancy, and misinformation, while other programs detailed procedures surrounding vaccine mandates and vaccine-related injuries.

Although the conference considered the legitimate arguments advanced by vaccine skeptics and critics, the presentations generally pointed to the undisputed efficacy of vaccination and frequently called upon historical and legal practices that supported its widespread use.

In his introductory remarks, conference organizer and chair Brian Dean Abramson quoted Justice Scalia’s words in the 2011 Supreme Court decision in Bruesewitz v. Wyeth LLC to frame the conference: “For the last 66 years, vaccines have been subject to the same federal premarket approval process as prescription drugs, and compensation for vaccine-related injuries has been left largely to the States. Under that regime, the elimination of communicable diseases through vaccination became ‘one of the greatest achievements’ of public health in the 20th century.” In the 1970s and 1980s, however, vaccines became “victims of their own success,” Scalia wrote. “They had been so effective in preventing infectious diseases that the public became much less alarmed at the threat of those diseases, and much more concerned with the risk of injury from the vaccines themselves.”

“In an ideal world the concept of vaccine law would be like the law of brushing your teeth,” Abramson said. “It would be something people wouldn’t be worried about because everyone would understand the public health aspects of vaccination and that it’s good public policy. We wouldn’t have so many different systems and structures in the law to facilitate vaccination.” 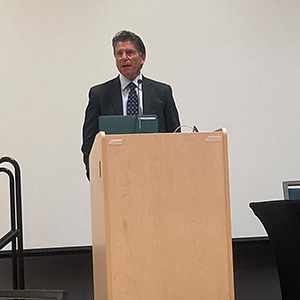 Ken Randall, dean of the Antonin Scalia Law School, said he himself has had to grapple with issues relating to mandates; state and federal regulations, including Occupational Safety and Health Administration rules; and policy considerations during the pandemic.

One such conflict involved a member of the law school faculty, professor Todd Zywicki, who sued the school over its COVID-19 vaccination policy. “It was a lot of fun to be in the dean’s office when my boss, the president, was being sued by a faculty member,” Randall said. The matter was ultimately settled to the satisfaction of all parties, he added.

Roger Price, a retired partner at Seyfarth Shaw LLP and author of the book When Judaism Meets Science, said Judaism and vaccinations go back more than 200 years in Europe during the smallpox outbreak. The Torah’s book of Deuteronomy, for example, instructed Jews to take good care of themselves, and Jewish people have an obligation to use proactive measures to protect the communities against unseeable harm to themselves and others, Price said.

Price also referenced the teachings of Rabbi Nachman advocating the vaccination of children against smallpox in the late 1700s. He paraphrased Nachman’s teaching by stating: “We must be careful about the health of children. Whomever does not vaccinate every baby against smallpox feels like one who sheds blood.” Price further explained that the rabbi’s teaching “motivates many Jews of all nations, resulting in an overwhelming if not universal support for government-mandated vaccines.”

Kathleen A. Curran, senior director of public policy at the Catholic Health Association of the United States, explained that the Catholic Church takes a similar stance, while Mustafa Umar, religious director at the Islamic Center of Irvine and founder and former director of the California Islamic University, explained that the Qur’an doesn’t mention vaccines. However, Islamic communities are mostly guided by the religious law of sharia and the Islamic jurisprudence based upon the teaching of Allah, called fiqh, which advocates the safety of oneself and the common good of others, Umar said.

The speakers also addressed what is problematic for many religious observers — the ingredients within vaccines. Some Jewish people object to the use of pigs, which are not kosher in their religion. For Catholics, an issue is using cell lines from aborted fetuses. And for Islamic communities, the use of blood, pigs, and remnants of nonhalal animals is objectionable.

But in all of those cases, the safety of oneself and the community triumphs those arguments, Curran said. “At the abstract level, vaccines are morally neutral. They are a tool for health care,” she added. “So, when we decide whether we take a vaccine or not, a Catholic must consider how it would protect their own health but [also] how their vaccination status might affect others.”

Umar mentioned that many Islamic scholars use the teachings of transformation and dilution to counter anti-vaccination arguments regarding ingredients. “Vinegar used to be made from wine. And Muslims cannot consume toxicants at all,” Umar said. “But if you have wine and it transforms into vinegar, it is no longer wine. So, if one substance transforms into a different substance, even if it came from something else that was prohibited, it is permissible to be consumed.” 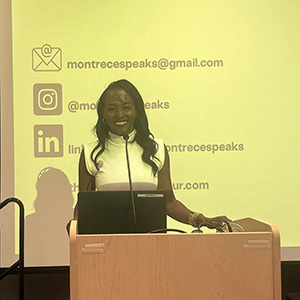 Montrece Ransom, president of the American Society of Law, Medicine and Ethics, addressed equity issues in her closing keynote, centering her speech on the “phenomenon of belonging” and how it can impact all individuals in a society when it comes to public health. According to Ransom, a lack of sense of belonging is a negative predictor for vaccine uptake and is a positive predictor of deeply held beliefs around why people in marginalized communities are hesitant to get vaccinated.

She encouraged public health practitioners to acknowledge the role that law plays in determining the health of populations. “There is no public health without the law,” Ransom said. “It is the law that creates the framework for healthy choices. The law plays a profound role in shaping life’s circumstances and health. The law has [also] been used and continued to be used to design, create, and perpetuate social conditioning that can have terrible generational, long-lasting physical, mental, and emotional effects on individuals and populations.”

Each year the D.C. Bar Judicial Evaluation Committee invites Bar members who have appeared before certain selected judges on the D.C. Court of Appeals and D.C. Superior Court to provide feedback to help improve judges’ performance and further the courts’ commitment to the administration of justice. This year’s evaluation period runs from November 15 to January 13.