Bar, Courts Look Back on Challenges, Celebrate Successes in 2021 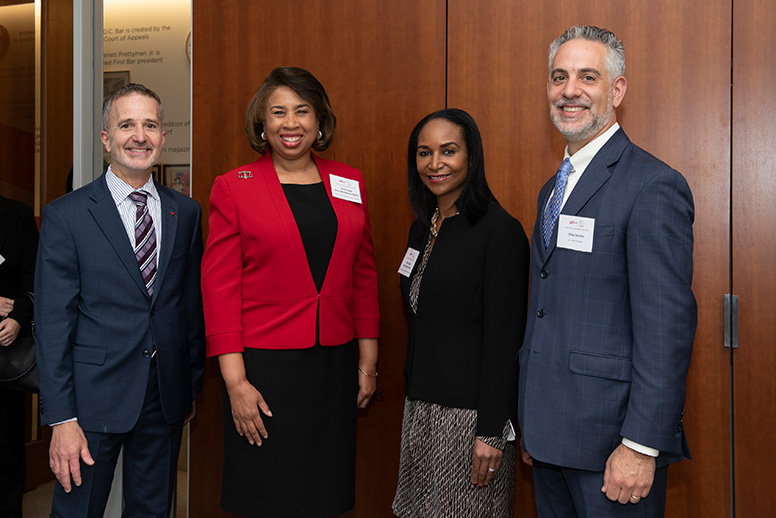 D.C. Courts judges and D.C. Bar leaders gathered at the Bar’s headquarters on Tuesday, April 26, for the Judicial Leadership Luncheon to celebrate successes in the past year despite the challenges presented by the COVID-19 crisis.

“This is weird. I feel like I should be pressing unmute then scrolling across my screen to find everyone,” D.C. Court of Appeals Chief Judge Anna Blackburne-Rigsby said on the event’s return to being an in-person affair after two years of virtual meetings. “It’s nice to see you all in person and to be back here together.”

During her remarks, Blackburne-Rigsby welcomed Associate Judges Loren L. AliKhan and John (J.P.) Howard III, the two new additions to the court. Both were sworn in this past February and will serve 15-year terms. Shortly before their confirmation, the D.C. Courts had sounded the alarm on the long-standing vacancy crisis in the local court system.

“So, it’s wonderful to have eight [judges],” Blackburne-Rigsby said. One more nominee to the court is awaiting Senate confirmation, the chief judge said, and three candidates have recently been recommended by the District of Columbia Judicial Nomination Commission to fill an upcoming vacancy on the court with the anticipated retirement of Judge Stephen H. Glickman.

Blackburne-Rigsby also talked about the D.C. Courts’ efforts to combat racial injustice, saying the District of Columbia has always been a leader in promoting fairness and access to justice initiatives. “The Conference of Chief Justices, which I am a part of and represent the District of Columbia, passed a resolution on ensuring racial justice in state courts around the country,” Blackburne-Rigsby said. “And we had unanimous support, which is no small feat. You may have noticed that for the first time . . . many judges spoke out about the importance of ensuring equal justice under law.”

“This was a moment in history that I felt we could not sit on the sidelines. So now we have a racial justice and racial equity initiative at the D.C. Courts that we are very proud of. And you're going to hear more about this,” she added. The D.C. Courts also recently received a grant from the National Center for State Courts (NCSC) to launch an eviction diversion initiative in Washington, D.C., the chief judge said.

Reporting on the Bar’s accomplishments, President Chad Sarchio talked about how Bar staff navigated various technologies to continue to serve members during the pandemic, citing the outstanding work of the Bar’s Continuing Legal Education Program, Client Arbitration Board, Lawyer Assistance Program, and Legal Ethics Program, among others. 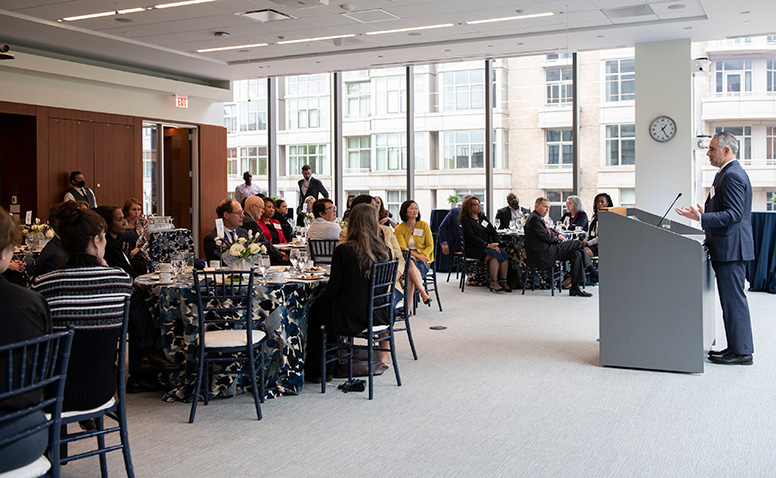 Sarchio also commended the work of the D.C. Bar Pro Bono Center in responding to the needs of small landlords and tenants across the city reeling from the impact of the pandemic. “Since June 2020, there's been an incredible partnership with five other legal services organizations across the city to deliver eviction and other rental and housing assistance to some of the neediest members of our community,” Sarchio said. “It's been an incredible story of innovation and persistence and can-do attitude.” Sarchio cited a companion Pro Bono Center project, focused on eviction record sealing, which has been up and running since January 2021. “That project has seen incredible record of success,” he said.

As the city emerges from the pandemic, the D.C. Bar is gearing up for a historic year: its 50th anniversary. “I think the 2022 D.C. Bar Conference is going to be one for the books and to keep in our memories,” Sarchio said.

Taking place on June 23, the annual event features former U.S. Attorney General Eric H. Holder Jr. as keynote speaker. “He is a titan and [is] internationally recognized for his expertise in regulatory enforcement, criminal justice matters, national security interests. It will be a fabulous opportunity to get his unique perspective on the past, present, and future of our profession in the delivery of justice across the community,” Sarchio said.

In her closing remarks, D.C. Superior Court Chief Judge Anita Josey-Herring reiterated the significance of the NCSC grant to address evictions in the District and commended the “cohesion between the court and the Bar” to meet the legal needs of the District’s most vulnerable residents.

“Your advocacy here at the Bar is really critical in helping us to really do so many things at the Superior Court,” Josey-Herring said. “You advocate for us when we need more judges. Because we are 13 down on the Superior Court and have three more expecting to leave before the year ends, the advocacy that you do for us locally and on the Hill is critically important to us.”

On August 10 the Superior Court of the District of Columbia issued Administrative Order 22-18 regarding its conversion to a new case management and electronic filing system on August 22.

The District of Columbia Court of Appeals has announced that public access to certain cases is now available on the court’s website. Currently, access is limited to civil briefs and orders filed or entered after August 1, 2021. The ultimate goal is to provide more web-based access to additional case types in the future.

The D.C. Access to Justice Commission raised a record $7.2 million during its 2021 Raising the Bar in D.C. Campaign, with 34 law firms donating a portion of their D.C. office revenue toward enhancing access to civil legal services in the District.

On July 26 the District of Columbia Judicial Nomination Commission recommended D.C. Superior Court Judge Anthony C. Epstein to fill the judicial vacancy on the D.C. Court of Appeals created by the retirement of Judge Kathryn A. Oberly.