More than 300 people tuned in on May 4 and 5 for the D.C. Bar Taxation Community’s 2022 Tax Legislative and Regulatory Update conference, which provided insights and updates into recent and upcoming tax policy changes.

What’s Hot on the Hill

In the May 4 plenary session moderated by Todd Metcalf, principal at PricewaterhouseCoopers, panelists discussed the reconciliation tax bill that passed in the House last fall but stalled in the Senate, as well as the priorities of the House Ways and Means Committee in the remaining months of the 117th Congress. 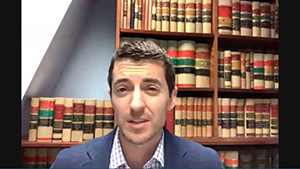 If the Republican Party wins back the majority in the midterm elections, its priorities will include making permanent the middle-class tax cuts and child tax credit in the Tax Cuts and Jobs Act of 2017 that will expire in 2025, according to Derek Theurer, Republican chief tax counsel on the House Ways and Means Committee. Theurer said Republicans are also looking forward to the passage of the SECURE Act, which will require employers to provide for automatic enrollment when introducing new 401(k) plans.

“Our members are really thinking about the current economic situation,” Theurer added. “It’s pretty clear that we are a little wobbly as far as our economy [goes]. There is a risk of downturn. Members are thinking about ways in which, through tax and other policies, we can create more stability for families.”

Courtney Connell, Republican senior tax counsel with the Senate Finance Committee, added that a focus on the trade space, particularly in response to Russia’s invasion of Ukraine, and a bill that would pay for $52 billion in semiconductor chip manufacturing subsidies to boost U.S. competitiveness with China will also be on Republicans’ priority list if they secure the majority in November.

Democrats, on the other hand, will continue to push for the Build Back Better package, which includes making the tax code better and allocating more for the IRS, said Tiffany Smith, chief tax counsel for the Senate Finance Committee Democratic staff.

Addressing revenue projections amidst the continuing pandemic, the war in Ukraine, and rising inflation, Thomas Barthold, chief of staff for the Joint Committee on Taxation, reported that the 2022 Congressional Budget Office’s baseline projections are not ready yet. “Usually that’s in place by the end of February,” Barthold said. “But because of legislation late last year, their [analyses] are delayed. So, in some respects, that’s been a boon in the Congressional Budget Office in their macroeconomic analysis. They have been able to see recent changes such as inflation and tightness in the job market. That information will be reflected in the projections that they make.”

One of several breakout sessions on May 4 offered a deep dive into cryptocurrency and related reporting issues following important developments in the past year.

On November 15, 2021, President Biden signed the Infrastructure Investment and Jobs Act, which defined digital assets and extended reporting obligations for certain cryptocurrency transactions, among other items. Additionally, Biden’s Build Back Better Act, which remains stalled in the Senate after clearing the House in November, contains two proposed changes that would extend “wash sale” and “constructive sale” rules regarding losses and gains to cryptocurrency.

On April 7, 2022, the Biden administration issued “General Explanations of the Administration’s Fiscal Year 2022 Revenue Proposals,” better known as the “Green Book.” Within the Green Book is an expansion of security loan terms to the digital assets space, as well as information reporting by certain financial institutions and brokers and reporting requirements for certain taxpayers who hold foreign digital assets.

Erika Nijenhuis, senior counsel in the Office of Tax Policy at the U.S. Department of the Treasury, said many taxpayers engaged in crypto lending may not have access to sophisticated tax advice, and that the tax consequence of getting it wrong could be costly. “Given that, we thought it would be preferable to have a congressional mandate as to how to treat crypto lending,” Nijenhuis said.

Amie Colwell Breslow, of counsel at Jones Day who moderated the panel, noted some of the new administrative guidance regarding digital assets, including a recent executive order that advised multiple agencies in the executive branch to take a consistent approach on digital assets.

Natasha Goldvug, attorney-advisor for the Office of Tax Policy at the Treasury Department, explained that the government’s top priorities are related to regulations in broker recording requirements. Other priorities include working with other nations to develop the Organisation for Economic Co-operation and Development (OECD)’s global tax transparency framework, which provides for the automatic exchange of tax information on transactions.

Currently, section 1058 of  the U.S. tax code does not apply to crypto loans, only to loans of securities, said Lisa Zarlenga, a partner at Steptoe and Johnson LLP. She also pointed out that more retail investors are participating in the lending of crypto assets, and that crypto lending is happening more frequently through decentralized financing using smart contracts or peer-to-peer transactions instead of going through a middleman. 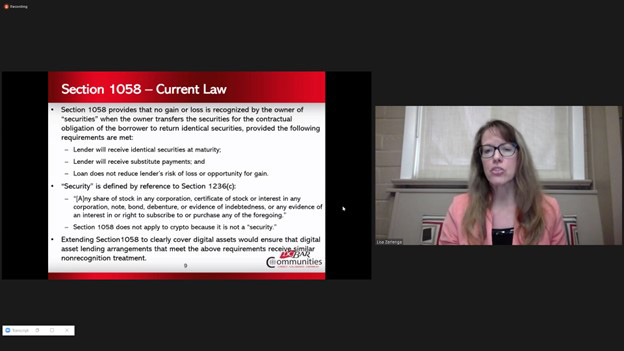 “It’s possible that a loan of crypto could result in a [tax] realization event both upon the loan itself and upon the repayment of the loan. There is currently no guidance that directly addresses the tax treatment of crypto loans,” Zarlenga said. “The Green Book proposes the extension of section 1058 to loans transferring digital assets recorded on cryptographically secured digital lenders if the loan terms are similar to those currently required for tax-free loans of securities.”

Stay tuned for coverage of day two of the Bar’s 2022 Tax Legislative and Regulatory Update conference.